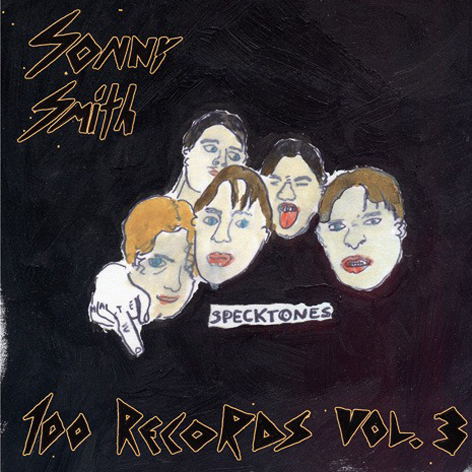 Singer-songwriter Sonny Smith (of Sonny & the Sunsets fame) will release the third and final volume in his 100 Records series on January 29th via Polyvinyl. Inspired by a 2010 residency at California’s Headlands Center for the Arts, the “100 Records Project” saw Smith spend over a year writing and recording 7″ singles for 100 fictitious bands. Along with releasing volumes one and two in limited runs, Smith first shared the tunes with the public at San Franciscos Gallery 16, in an art exhibit featuring a homemade jukebox.

“I started writing a novel which had some of these characters that were kind of based on real musicians,” Smith told the Village Voice in 2010. “But they’re all gradations of me, to some extent, too. There are a few instances where I tried to make a reggae tune or somethingI don’t think it was that successful. But there’s also a small handful of them I’m actually trying to make full-length records of.”

Within this final collection of 15 cuts, Smith displays one of the more varied swaths of his plentiful musical influences. There’s the country funk of the Fuckaroos’ “Cosmorama”; Merriweather Bradley’s hybrid folklorico ballad “Medication”; and even a little talking blues courtesy of Hank Champion’s “From Dud to Stud, From Zero to Hero”. But no matter the emotional intent or the overall aesthetic, each number is defined by Smith’s passion and dedication and free-spirited sense of musical exploration.