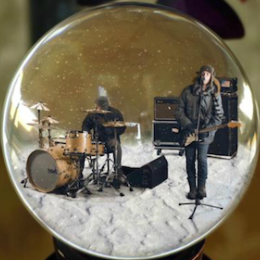 “The song was inspired by the brutal Chicago winters,” explains Local H frontman Scott Lucas of “Another February”, off last year’s Hallelujah, I’m A Bum. “It comes on after the holidays and everything just seems to slow down…It gets tough for people. It reminds me of animals in the wild scratching for food until the spring comes.”

But while that would make for a neat-o video concept, the clip instead features the duo in full Arctic gear thrashing around in an oversized snow globe and waltzing about a sun-soaked park, all while children and beauties in sun dresses stare in confusion. Message received: everyone live on the West Coast, where there’s basically 1.5 seasons. Feel the sunshine on your face when you watch below.

“Another February” is the centerpiece of a forthcoming EP. It also includes covers of Rush and The National, as well two alternative versions of cuts from Hallelujah, I’m A Bum.