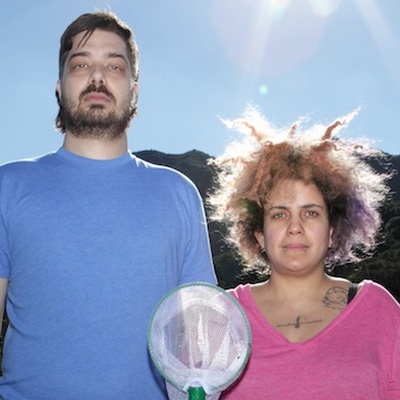 Underground rap icon Aesop Rock and Moldy Peaches’ Kimya Dawson have joined forces to form The Uncluded. Seeing as how the two toured together and guested on each other’s past albums  Aesop on Dawson’s 2011 Thunder Thighs and Dawson on Aesop’s 2012 Skelethon  it’s not too surprising that they’d want to take their musical flirtations to the next level.

The Uncluded will release their debut album, Hokey Fright, on May 7th via Rhymesayers. It’s comprised of 16 tracks, one of which called “Delicate Cycle” features Yo La Tengo’s James McNew.  Below, watch the video for the album’s first single “Earthquake”.

According to a press release, the name Uncluded was inspired by Imaginationally, a book by Michael Bernard Loggins and means “to keep the things you don’t appreciate out of your life.” The band goes on to describe the LP saying, “This record helps to tell the story of two people who are finding therapy through making art together.”