Dawn McCarthy and Bonnie ‘Prince’ Billy – What the Brothers Sang 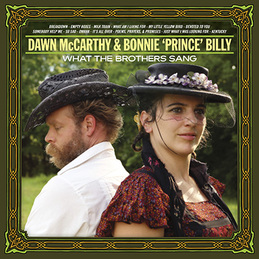 What does it mean to bring the music of your childhood into the childhood of your own children? Bonnie “Prince” Billy and frequent collaborator Dawn McCarthy (of Faun Fables) answer with What the Brothers Sang, a full-length tribute that reinvigorates the songs of the Everly Brothers with a clean, respectful gloss.

Phil and Don Everly’s impeccable harmonies set a standard for pop music that funneled into the songs of the Beach Boys, the Beatles, Simon and Garfunkel, and nearly everyone since. It’s a pleasant surprise to hear how deftly Oldham’s oaky tenor traces their smooth melodies; these songs fit better into his gentle country aesthetic than might be expected. Oldham and McCarthy breathe some twang into the Everlys’ harmonies, but still resonate almost as a single voice. Just like their original performances, these renditions could hardly be called “duets”.

Many of the record’s songs evoke a kind of superimposed nostalgia. “Milk Train” waxed wistful for a simpler time back in 1968; in 2013, it waxes nostalgic for an era when we could even imagine a simpler time. “Devoted To You” arrives with an English folk arrangement that strays from the original recording, but also serves it beautifully. The record’s 13 tracks aren’t so much cover songs as they are organisms grown from old DNA. After all, Phil and Don Everly didn’t write most of what they performed. What the Brothers Sang hearkens back to a time when there was more space between the songwriter and the song; when songs didn’t “belong” to a single musician, but to an array of performers and listeners alike.

The album is more a loving revival than a modernization of some of the Everly Brothers’ lesser-known songs. But when the duo’s influence can still be heard trickling into everything from Fleet Foxes to Animal Collective, it’s hard to claim that What the Brothers Sang does much more than reminisce.