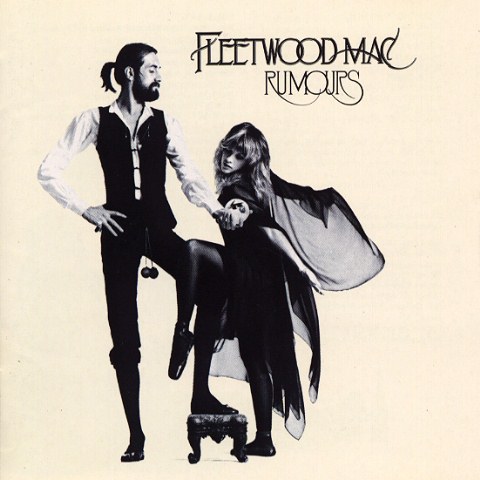 I’ll admit: I’ve made love while Rumours spun on the turntable beside my bed. It was beautiful and sentimental, an unforgettable experience (that I probably shouldn’t be divulging in an album review). But there’s no record that better soundtracks sex than this one. Hell, if you’re between the ages of 25 and 36, there’s a decent chance that you were conceived to these songs. They’re romantic — tales of love and lust, love making and love breaking — infused with universal emotions that nearly everybody can relate to and understand. The critics gave it rave reviews, the general public bought 40 million copies, and the Grammy association crowned it Album of the Year in 1977. Rumours was a rare, ubiquitous success. How?

Heartbreak. The five musicians who wrote these songs were a complete mess at the time. Let’s take inventory: Drummer Mick Fleetwood’s wife cheated on him with his best friend; on-and-off couple Lindsey Buckingham and Stevie Nicks finally split prior to these recording sessions; and longtime Fleetwood Mac members John McVie and wife Christine were going through a divorce. Shit was fucked up.

Yet, despite all these tumultuous relationships, the music survived. The McVies bickered and fought in social situations, but worked symbiotically while writing songs. Same goes for Nicks and Buckingham. The record label wanted an album, and Fleetwood Mac delivered. The band took that “fucked up shit” and turned it onto itself, crafting 12 songs about the age-old strife of Boy vs. Girl. Buckingham picked up his acoustic guitar and composed the sparse folk number “Never Going Back Again”. And why would he want to return to a relationship that left him teased and tortured? Nicks was (and remains) a beautiful woman — one helluva vocalist and songwriter. Clearly, their breakup affected him. He also countered with “Go Your Own Way”, an FM staple and a pointed piece of advice. “Loving you isn’t the right thing to do / How can I ever change things that I feel?” He sings it reluctantly.

Nicks was equally transparent with her lyricism. “Dreams” — the band’s only No. 1 single — is literally a direct reply to Buckinghams’ songs: “Now here you go again / You want your freedom.” The dialogue that runs throughout Rumours gives it unity. Rarely do multiple songwriters compile a set of songs that work so well together.

Christine McVie is the odd one out. At first listen, her songs don’t appear to fit the back-and-forth narrative outlined by Nicks and Buckingham. While they sing of post-separation angst, McVie waxes optimistic on “You Make Loving Fun”, clinging to the best parts of her marriage as it begins to crumble. “Don’t break the spell / It would be different and you know it will” — despite the song’s misleading title, you can tell by the longing in her voice that she’s aware of the distance growing between her and John. Her words are tinged with denial, but she knows their spell is being broken. He made loving fun. Now, things are different.

Rumours is quietly distraught, but it sounds so pleasant. On nearly every track, Nicks, McVie, and Buckingham bounce their voices off one another; their harmonies glisten, so cooperative and unified — in utter defiance of the estrangement depicted in the lyrics. Buckingham’s chiming guitar work sticks to the major key and gives these songs the accessibility that made them hits. Christine McVie’s keyboards are an underrated sonic element. She achieves a warm tonality that’s largely responsible for the record’s sexy mood. The sounds are passionate, the words are fragile. And what makes Rumours so remarkable and relevant is that it remains fragile and passionate 35 years later.

The folks at Rhino Records realized this, celebrating the album’s 35th anniversary with all-encompassing box set containing an LP, four CDs, a documentary, and nearly 50 live cuts, demos, and outtakes. In practicality, it’s excessive and overwhelming. Nobody needs three unfinished versions of “Songbird”. But from a historical, archival standpoint, this package is extremely valuable, as Rhino left in the studio banter and rough cuts from the recording sessions; you get to overhear Fleetwood Mac as they make the record.

Earlier this week, NPR blogger Bob Boilen published a dissenting piece called “Why I’ve Never Liked Fleetwood Mac’s Rumours”. He complains of “planned and orderly” production, “goofy lyrics”, and a record stained with the “taint of the past”. The first two points are just opinions, and to each his own. But I adamantly disagree with his closing statement. Just because a record is released in 1977, it’s tainted by the past? No. Aesthetically, Rumours sounds like an older record; however, the songs (and the emotions contained within them) hit with as much poignancy as they did three decades ago. As a 22-year-old in 2013, I can play this album and feel and emote and project my own sappy thoughts onto those of Buckingham, Nicks, and McVie. Or I can play it when I have a girl over and let it set the mood. I can’t help but think that the twentysomethings of the past shared a similar relationship with Rumours. And that’s why, after 35 years, it endures.