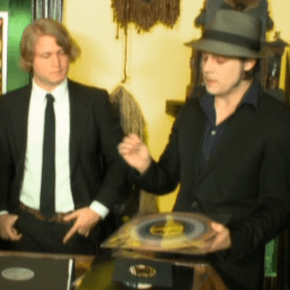 Earlier this week, we pointed you to a clip from VH1’s show For What It’s Worth, featuring hosts Gary Baba Booey DellAbate (!) and Jon Hein interview Jack White about his famed Tripe Decker Record. Now, as Pitchfork points out, the full episode is streaming online.

The Antiques Roadshow-type program explores the “intricate world of music and pop culture memorabilia, and the mind of ‘The Collector’.” In the inaugural episode, DellAbate and Hein tour Third Man Records in Nashville, before meeting up with White to discuss his various vinyl record inventions, his subscription service The Vault, and more.

White said he’s not concerned with how much his records cost to make or their worth on the open market. “None of these ideas are profitable. The point is we want these to exist,” he explained.

He also revealed that the one idea he has yet to pull off is an “infinity vinyl that would start at the beginning, go to the center, then skip over itself and go back to the beginning and theoretically play forever.”

Watch the full episode below.