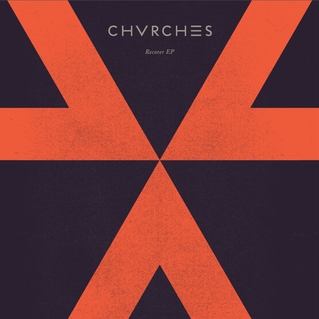 In their small time together, Glasgow’s CHVRCHES have amassed a loyal following and heaped lots of praise. The trio of Lauren Mayberry, Martin Dohery, and Ian Cooks matriculated in 2011 and since then they’ve managed to rebrand today’s confused synthpop genre without a proper full-length. Such success lies in their formula: Mayberry’s innocent, despondent vocals pulse and yelp through catchy waves, while Doherty and Cooks’ clever soundboards and dancey bass tickle the ears. It’s upbeat, catchy stuff — after all, it is synthpop — but there’s an eerie aftershock that torments the sound far beyond the traditional boundaries of pop.

The titular single manifests itself here in three incarnations, two of which are remixes by Austrian mix master CID RIM and the UK-based Curxes. Albeit fun inclusions — and quite interesting to hear Mayberry’s voice undergo electronic tempo changes — the original, get ready for a shocker, is the strongest of the bunch. The track positions listeners at that terrifying moment of no return as a couple faces the harrowing decision to either stay together or call it quits. Mayberry intones: “I’ll give you one more chance to say / We can change our old ways / You can take what you need / And you don’t need me.”

“Now is Not the Time” is a graceful composition that could muscle its way onto an 80’s discotech playlist while “ZVVL” (perhaps a reference to Ghostbuster‘s Zuul the Gatekeeper of Gozer if one follows the “U” and “V” switcheroo to its bitter logical end) finds Doherty trading responsibilities with Mayberry on a slower number that builds momentum without ever breaking. Need an image? Picture a tree’s rapid contortions amongst a fierce Scottish wind.

This year is shaping up to be a good one for the band. During their recent marathon run through Austin’s South by Southwest, CHVRCHES attracted multiple eager crowds and nabbed the conference’s Grulke Prize for Best Non-U.S. Act. Expectations are high, sure, but the group has reassured their true believers with a solid cornerstone of an EP. Can I get an amen?

Essential Tracks: “Recover”, “Now is Not the Time”