David Bowie – The Next Day 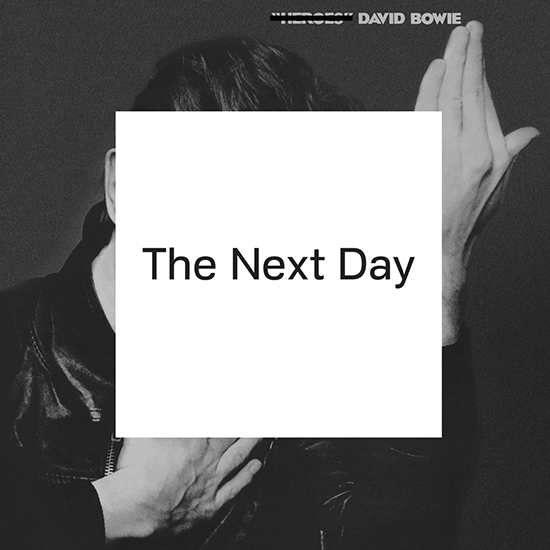 When The Next Day was announced, speculation ran rampant. The first single, Where Are We Now?, presented David Bowie musing on the Berlin he inhabited almost 40 years ago. The radical album art defaces the centerpiece of his Berlin Trilogy, “Heroes”. Tony Visconti, his frequent collaborator who produced that period, was back. It was all quite transparent: after 10 years between albums, Bowie hasn’t returned to shelve out some catchy art rock, he’s come back to make a statement.

You can chalk what is that statement? up on the list of puzzles to solve. The Next Day is a dense and varied body of work that Bowie has all but outright challenged fans to cross examine. Invoking the “Berlin Trilogy” suggests that The Next Day might be more than meets the eye conceptually, and at the very least, should serve as a red flag that listeners’ wits should be about them. None of the record’s 14 tracks are casual affairs, and only few of them are catchy enough to overcome a passive listen. The latest single, The Stars (Are Out Tonight), is as easy as Bowie will go on listeners without a greater investment of time, and that track still offers a multi-layered experience.

It’s been suggested that the title, The Next Day, could refer to the track Heroes. If we could be heroes, just for one day, then this would be the day afterward. However, the title track is another thing entirely. Inspired by a recent interest in medieval history, Bowie writes a thrashing rock song of priestly conspiracies, angry mobs, and a heathen not quite dead… body left to rot in a hollow tree. Instead, it’s the somber first single, Where Are We Now?, that serves as the only strict tie to Heroes. Had to get the train from Potzdamer Platz, sings Bowie, mentioning a key landmark where the Berlin Wall formerly divided the city. The song could be not only Bowie’s emotional revisiting of a landscape that’s changed so much, but a return to that bold young couple standing by the wall in 1977.

Bowie’s nods to his back catalog don’t start and stop with Berlin. The album’s penultimate track You Feel So Lonely You Could Die could be an important part of the Bowie mythos, waiting to be torn apart by fans: a classically styled rock ballad that ends unmistakably with the opening drums of Five Years from Ziggy Stardust and the Spiders From Mars. This is more than a head-nod to some of his most famous work  the song itself is a likely suspect as a follow-up, or perhaps prelude to that story. The lyrics easily fit into Ziggy‘s future world of indifferent, over-indulged youths, five years before humanity’s end.

Analyzing the rest of the record as sequels to previous albums gets sketchy after that. Keep listening for tag-backs and more faint similarities to show up, but much of it could be projection. If the unifying theme of The Next Day is Bowie revisiting albums, perhaps for most of the tracks, the revisiting is conceptual rather than narrative. There’s no definite answer in reach, but an integral part of enjoying this record is asking these questions.

Bowie’s prior album, 2003’s Reality, was a quintessential rock record for the Thin White Duke. It was accessible, delivered a couple great covers, and generally had something for everyone. As a whole, The Next Day is the opposite experience. It’s a challenging album, and not just because its tracks are a puzzle box — the mix is dense. Perhaps more than any of Bowie’s prior 23 records, this one is an art record. Not art in how affecting it is, or even how complex it is by design, but in that it’s made to be carefully considered, deconstructed, and debated. On a track-by-track basis, the album becomes less obtuse. Though bound by the dense mix, the tracks of The Next Day stand alone.

Dirty Boys sounds like it could’ve taken a page from a Tom Waits LP  a circus dirge with dirty sax and a smooth chorus. Love is Lost is an organ-heavy rock grind on the subject of grim cosmetic transformation and social dysphoria. If You Can See Me has one of the most abrasive sounds on the record; it’s a drum and bass-heavy track that would sit snug somewhere between 1993’s Black Tie White Noise and 1995’s Outside. In fact, the delightful, disjointed, and impenetrable lyrics could find a home with the latter album, or one of its long-discussed sequels. The final track, Heat, invites the most questions with its desolate, desert-like yawn and lush details that tease a mysterious narrative.

In three tracks, Bowie surprises with sociopolitical stories more befitting his quasi-folk rocker days than anything he’s written in the past 30 years. Valentine’s Day is a tragic ballad, almost a love song, to a high school shooter. I’d Rather Be High chronicles a modern soldier’s bitter return to society after training these guns on the men in the sand. And How Does the Grass Grow? is another wartime track with a chorus taken right out of a chant used in bayonet training.

Coming to terms with The Next Day has been an ordeal and a struggle of initial indifference. One has to dig deep and fight uphill to connect here, but that climb results in a rewarding, fascinating listen. Yet what’s more intriguing is speculating on what The Next Day could become and whether or not any of its mysteries will be solved. As always, Bowie remains in constant metamorphosis and here we are once again with a litter of erratic questions. Though, the mere fact that we’re spinning around in speculation only champions this as a success.

Essential Tracks: You Feel So Lonely You Could Die,  ”The Stars (Are Out Tonight)”, and “Where Are We Now?”