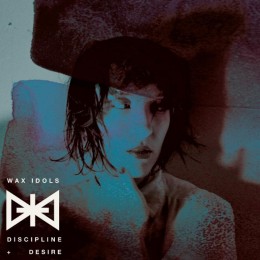 It’s easy to wax poetic about The Velvet Underground, from Lou Reed’s loaded stare behind Ray-Bans to Andy Warhol-curated freak conventions. Often dubbed the forefathers of punk, the Velvets were undoubtedly one of the first bands to not only embrace but celebrate the underbelly of human desire — fetishization, bondage, and sadomasochism — in a cacophony of textured white noise.

The album’s single “Sound of a Void” features Fortune inviting the listener to “turn down this static world” and instead pay attention to the spaces within a void. In a world that’s becoming increasingly more interactive, Wax Idols harken back to that time when punk rock signified social change with picket signs instead of online petitions. By infusing diaphragm-bursting bass lines with a sheen of pretty pop amidst the grime, the Idols let us know it’s okay — no, demand for us to be different.

Fortune’s wicked and wonderful vocals shine through the static on Discipline & Desire. It’s tough to not think of Siouxsie Sioux or Joan Jett’s electric sonic presence. Even just listening, Fortune’s vocal prowess is all-knowing. She encompasses the listener, and her growl becomes increasingly resonant as the album progresses with the wooziness of tracks like “Scent of Love” and the reeling “Cartoonist”.

The only danger that Discipline & Desire treads is when its stronger and heavier tracks like “Elegua” become buried underneath the fuzz. Yet Discipline & Desire is an engaging listen, best suited for a drive down an empty highway, foot revving the engine and a leather jacket flapping in the wind.

From glorifying stories of sadomasochistic gore and violas calling out to the submissive Severin in “Venus In Furs”, the Velvets idolized discipline and desire as two halves of a whole, co-conspirators in a crime, and bitter enemies at the same time. With their sophomore release, Wax Idols are carving a place for themselves in the camp of reverb-addled musicians who just won’t settle for normality.