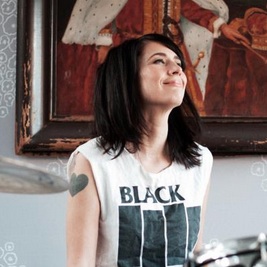 This week, a new documentary about riot grrrl icon Kathleen Hanna made its world premiere at South By Southwest. Directed by Sini Anderson, The Punk Singer takes a very intimate look at Hanna’s life, focusing not only on her musical career as former Bikini Kill and Le Tigre member and pioneer of the ’90s riot grrrl movement, but also her fierce battle with Lyme disease.

According to the Los Angeles Times, the documentary reveals that it took Hannah’s doctors six years to diagnose the disease, and its late-stage effects derailed her music career. Many of Hanna’s most distressing days were captured on film by her husband, Beastie Boys’ Adam Horovitz.

“I lied when I said I was done,” Hanna explained in the film (via Pitchfork). “I just didn’t want to have to face the fact that I was really sick. I was told by my body that I had to stop.” She added, “I told the world that I chose to stop playing music. That felt better than facing the reality of not being able to do what I love more than anything in the world.”

Hanna’s now four months into remission, and she’s since reimmersed herself in music with her latest project, The Julie Ruin. She told the Los Angeles Times: “Being sick made me feel like, I’m No. 1. I can’t constantly be trying to write the unwritten song, the song that the 15-year-old girl needs. I need to write the song that I need. I feel like having the movie frees me to make whatever I want.”

Below, watch a clip from the documentary where Hanna discusses the disease and its impact on her.