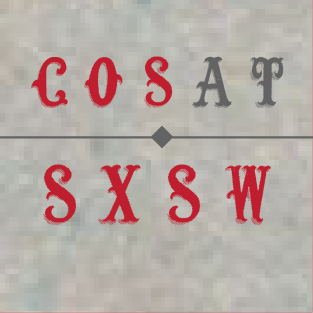 By the luck of the musical gods (and a decent pair of shoes), Consequence of Sound survived Wednesday, the first full day of South by Southwest. Diving in head first, we bared witness to some of the festival’s most anticipated big-name acts and, of course, the more low-key buzz bands, all the while avoiding mosh pits, dehydration, insomnia-induced madness, and paying $9 for a slice of pizza. Check out our full coverage, and come back tomorrow for even more SXSW insanity.

Set times are short at SXSW, but for Pallbearer their brief appearance was pretty criminal. The crowd nodded their heads while the gaping maw of their doom sludge was large enough to make the venue look about the size of a jalapeÃ±o popper. Their tempos just barely clocked in at double-digit numbers, their guitars tuned way down low, and the stoner guitar solos that connected their 10-12 minute songs were exalting in a full chest-to-the-sky, palms-out kind of pose. They closed with “Given to the Grave” — a dirge I would have let carry me all the way to my own. -Jeremy D. Larson

See that shoe? That about describes it. Maybe this one down here, too, for good measure. -Jeremy D. Larson

Meanwhile, back at the ranch…

Devendra Banhart was all smiles and dadaist humor amidst his stripped down solo set in support of his new album, Mala. Random wishes of Happy Halloween and an odd aside that ended withI dont mean to preach, but Audrey Hepburn really knew how to emote, you hear that world?! were just a few of the artists fun interactions with the folks that came out to cheer on a man who made the large convention center feel like an intimate camp fire jam with friends. Banhart opened with Golden Girls and flexed a number of new tracks off Mala, including Never Seen Such Good Things, Daniel, and Cristobal Risquez, which Banhart admitted was randomly lifted from a cousin’s name after struggling to find a title. Wont You Come Over closed a delightful show full of bird-like falsetto coos and a masterful display of finger picking. -Dan Pfleegor

The man in black stood before his congregation at dusk and asked if theyve ever heard about the Higgs Boson blues? Nick Cave and the Bad Seeds kicked off NPR Musics SXSW Showcase with an antagonistic yet charismatic performance. Intense hardly begins to describe it. The dark night was settling fast over Austin and its ringleader was a manic reverend who stalked about the stage like a predator in the desert. The crowd, composed of ticket lottery winners lucky enough to gain admission into this headlining event, had just enough time to grab some delicious Stubbs BBQ before Cave took the stage and launched into a furious string of songs, both old and new.

Several tracks from the CoS Top Star-earning Push The Sky Away found their way into the performance. Jubilee Street mesmerized the crowd with its ferocious fiddle sawing, while old favorites like Mercy Seat, Red Right Hand, and the titular track from the groups 1984 debut record From Her to Eternity whipped the audience into a fervor. The Bad Seeds brooding, hypnotic melodies accelerated, becoming heart-racing, cacophonic symphonies of angst and aggression that complemented Caves own soaring vocals and throat ripping screams. Both long-term fans and first-timers alike had to pause and let out a collective: Whoa, who was that? Caves own lyrics answered that question: Hes a ghost, hes a god, hes a man, hes a guru. -Dan Pfleegor

Baltimore’s Roomrunner is the kind of band that plays such tailor-made noises that you sit wondering, How the fuck did they make that sound? Was that a guitar? Did something break? But every noise, crunch, and screech in their set is so deliberately placed that things just work. From straight garage-punk to songs that could be a B-Side to Nirvana’s “Breed”, Roomrunners’ set poses them as a band that’s quality is directly proportional to their volume. -Michael Zonenashvili

Prior to closing his set with “For the Love of Ivy”, Japandroids’ frontman Brian King gushed on how it was a dream to open for Iggy and the Stooges. His adolescent excitement was shared amongst the overstuffed confines of The Mohawk. Youngsters and greying fans alike pummeled into the fishbowl of a venue, leaving thousands to listen and wait helplessly outside in myriad lines that snaked around the block in every direction. Then it happened: In the opening five minutes, “Raw Power” flipped the crowds over and “Gimme Danger” sliced off the leashes. This was a textbook rock ‘n’ roll show; the bold term you always recognize, but only read about. At 65, Iggy Pop might be the most dedicated, timeless veteran of his genre.

In promotion for Ready to Die, their long-awaited (?) followup to 1973’s Raw Power, the band offered up what basically amounted to a live performance of the album. While 2007’s The Weirdness still haunts The Stooges’ discography, their latest effort feels like an apt reunion record. “Dirty Deal” wrenches through Chuck Berry’s best riffs, only fueled by chugging diesel distortion; the poppy title track echoes late Ramones; “I Got a Job” digs deep into Iggy’s blue collar roots; “Sex and Money” gets way too sleazy; and, speaking of which, there’s a track about double D breasts.

Here’s one possible problem: The studio cuts will always lack the chutzpah of, say, a frontman singing while he’s fondling his genitals. Recent new single “Burn” doesn’t sound half as impacting on Soundcloud as it does between the hands of hundreds of fans, propping up the frontman’s lanky bag of bones. The same goes for the slow, heartfelt ode to the late Ron Asheton, whose loss was felt by one meditative Iggy over Bob Hoffnar’s pedal steel guitar work. These are lyrically-obtuse tracks that depend on Iggy’s charisma and on-stage charm, which is something past classics like “Search and Destroy”, “I Wanna Be Your Dog”, or “No Fun” never have to worry about — so, yeah, the jury’s still out on this album. But,  live? You’d be scum to miss this one. -Michael Roffman

Like Staten Island’s Wu-Tang Clan or Brooklyn’s Boot Camp Clik, Queens collective the World’s Fair is made up of several talented MCs (in this case, Jeff Donna, Prince SAMO, Cody B. Ware, Nasty Nigel, Remy Banks, and Lansky, the latter three also comprising the equally-talented Children of the Night). And just like their predecessors, World’s Fair utilize their sheer numbers and combined skills to create a confrontational stage show, presenting a multi-headed beast of vicious street rap or launching its individual components without ever forgoing sweat-soaked intensity or attitude. Despite having no actual group recordings to their name, the ensemble hit the stage with the confidence of a much older, more experienced group, setting the crowd ablaze with rapid-fire lyrical displays and, surprisingly, imaginary spheres that measured audience interaction. Not even the venue kicking on wrap-up music of AFI could deter the band from delivering their pseudo-rallying cry: “We came to your party / Fuck your party!” -Chris Coplan

“They’re The Replacements and Fang Island.” Someone told me that during Diarrhea Planet’s performance last night, and although it was hard to hear over four guitars (!), I nodded and agreed. Their name might turn stomachs worlds over, but the Nashville brats orchestrate — and no, that’s not hyperbolic verbiage — rock ‘n’ roll with so much heart and adrenaline. Their showcase shined with material off their forthcoming album, leaving their diehard gathering of fans to jump, cheer, swig, and scream. For me, it reminded me why I’ve dedicated my life to the genre. And when Thin Lizzy came on the PA shortly after, it was clear their message got across. Watch them, even if you feel the need to use Purell. -Michael Roffman

No one ever knows what to expect from Karen O, so you can just imagine the sort of controlled yet tired anxiety that raced through the crowd, when, after a long day of shows, Miss O dashed out on stage clad in an alt universe Dick Tracy Buckethead-chic. Her waves of wild energy surged into the crowd and before long, the at-capacity venue replied with wild applause and frantic cheers. Nick Zinner opened the set by scratching down the neck of his guitar as O threatened to “suck young blood” during the titular tribal anthem to their forthcoming Mosquito. Shortly after, Brian Chase, a madman with sticks, abused the drum kit while O stripped off the strange layers of her outfit during Cold Light, new track “Under the Earth”, and past favorite Gold Lion.

Following the funky chaos of other new track “Subway”, things calmed as the group dedicated an emotional rendition of their landmark single Maps to all the lovers in the crowd. That didn’t stop Karen Os manic stage antics, as she deep-throated the mic and waddled through the dark with a miner’s cap, which only highlighted her sinister, Cheshire cat grin. One major highlight was the live debut of recent garage Gospel single Sacrilege. While there wasn’t a choir for the assist, the pre-recorded backing tracks sufficed, even as O huffed and puffed in each chorus. Not surprisingly, the band closed the set with a raspy, ferocious rendition of Heads Will Roll — and their leader looked like she’d just been through war. Mission accomplished. -Dan Pfleegor

Or maybe you can call him Captain Murphy. Either way, the erstwhile absent Earl Sweatshirt was flanked by one of the best DJ’s in the world Flying Lotus and the primo stoner from the Odd Future crew Domo Genesis. The three showcased some new songs off his forthcoming album Doris, and a couple of oldies but goodies to get the crowd extra hype. This is the same venue that Tyler, The Creator staged his big coming out party two years ago, and while Earl doesn’t punk out like Tyler does and climb speaker cabinets and stage dive, he’s no calm zen-master either.

When you have FlyLo as your hype man, hell, that’s half the work done for you. As Earl tied his tongue around his new tracks, the crowd stood at attention (the cell-phone camera salute, rather), but “Chum” got everyone rowdy, and he shut down his short set with “Earl”. I remember when Tyler came and did “Yonkers” two years ago and everyone went nuts — he amped up the delivery to the song and all but screamed them into the mic. Not Earl, though. His lyrics are sinister enough to get everyone mobbing in the mosh pit that he barely needed to lift a finger. -Jeremy D. Larson

The fledgling Glasgow threesome has been generating a lot of buzz (bvzz?) lately. No worries, it’s warranted. The brief set covered most of the young groups shortlist of material, including several tracks from their forthcoming Recover EP. Throughout the show, frontwoman Lauren Mayberry proved that she was comfortable both behind the mic, as well as atop a stack of synths and programming boards. Bandmates Lain Cook and Martin Doherty bounced their heads and grooved along with the crowd of eager attendees, who waited in long lines for a chance to catch one of SXSWs most sought after performances. Mayberry shared that although the band has only been in town for a few days, theyve already learned the state’s notorious tagline: Dont mess with Texas. Charms aside, CHVRCHES ignited with a rousing version of The Mother We Share. -Dan Pfleegor