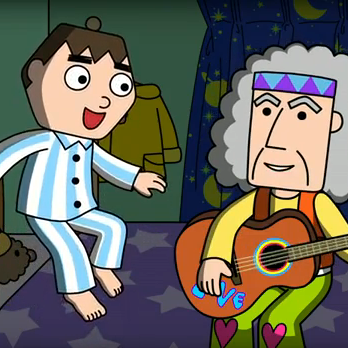 Japan is still deep in recovery from the 3/11 earthquake and tsunami that devastated the north-eastern part of the country two years ago. As the people there continue to rebuild, David Byrne and Sigur Rós have teamed with Zapuni, a charity organization that brings together visual artists from Japan and musicians from around the world, for a pair of animated videos benefiting children impacted by the disaster.

In the first video, Byrne revisits a tune he co-penned with Japanese musician Ryuichi Sakamoto for the latter’s 1994 record Sweet Revenge. Entitled “Psychedelic Afternoon”, this new version features the Talking Head on lead vocals and accompanies a video created by animation duo UrumaDelvi. A young boy still haunted by nightmares of the tsunami is soothed by wavy jam from his hippie grandfather that turns the boy’s dreams into something much more, well, hippie-ish.

Sigur Rós lends their song “HoppÃ­polla” from 2005’s Takk… to “Bloom”, an animated collaboration between the band and director Yutaka Yamamoto. As an old farmer tries to return his land to its pre-tsunami fertility, a group of angels hidden from sight do their part to aid in the restoration.

While you can watch both clips below (via Spin), it won’t do anything to aid in the relief efforts. To lend a hand, you can download “Psychedelic Afternoon” on iTunes, and purchase iPhone cases inspired by the videos at Zapuni’s website (or you can donate directly here). Profits benefit School Music Revival, providing musical instruments and special performances to schools damaged by the natural disasters in Japan.