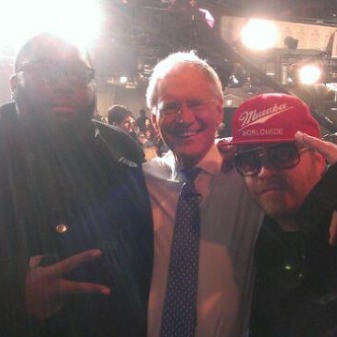 Atlanta’s Killer Mike appeared on Late Show with David Letterman last night, where he delivered a ferocious performance of “Untitled” off last year’s CoS Top Star-earning album, R.A.P. Music. He wasn’t alone, either. El-P and Scar both appeared in support and you can replay the whole thing now.

In related news, Killer Mike spoke with BET at SXSW, where he briefly discussed the possibility of an Outkast reunion. Rather hilariously, he suggested, ”I’ma just start giving out André 3000’s personal number so you guys can all call him,” to which he quickly added: “(André) is in the studio making music, and I think he’s itching to come back so hopefully he will. I know Big Boi’s willing and whenever he wants to we’re all right there.”

As previously reported, Killer Mike will join his local pal Big Boi for a 50 date, three month trek that kicks off next month in Athens, GA.