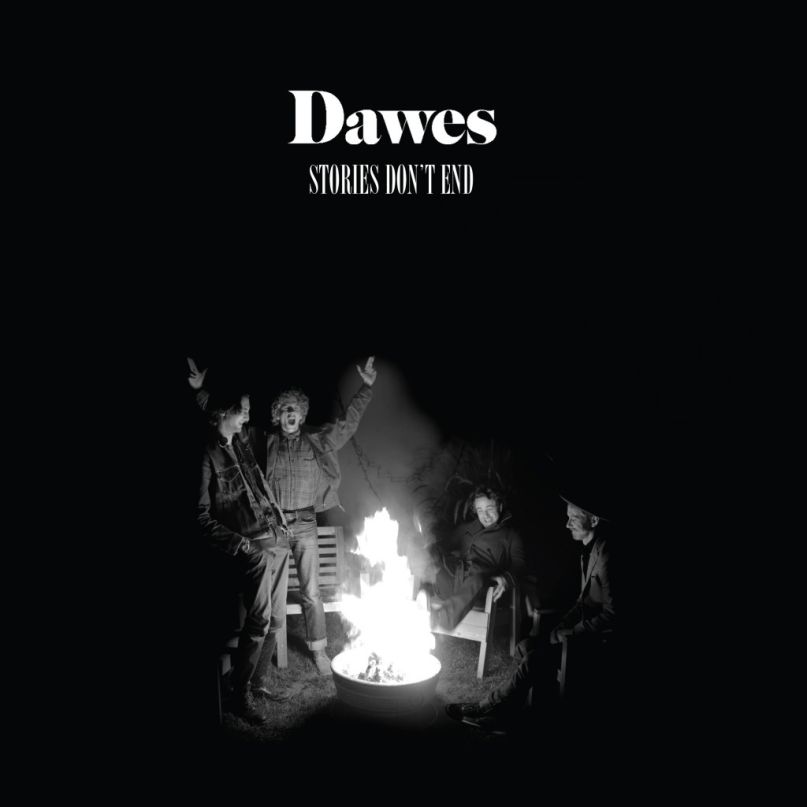 Ever since 2009’s North Hills, Dawes has been lauded for their throwback Laurel Canyon sound. Most bands would be content with a small niche and marginal success given the onerous terrain of the music biz, but this Los Angeles-based quintet strives to convey a contemporary tone on their third studio LP, Stories Don’t End. Though Dawes gravitates toward gushy guitar solos and lush three-part harmonies, they’re hardly outdated. The line between timeless and passé is a fine one and, as a result, their mission to establish itself as what singer/songwriter Taylor Goldsmith calls a “modern band” is not just commendable; it’s a creative necessity for any group with something relevant to convey.

Straying from their comfort zone, saccharine pop ditty “Hey Lover” finds drummer Griffith Goldsmith contributing a low range vocal cameo that’s a spirited change of pace. With a playful inflection, he quips: “I want to raise with you, and watch our younglings hatch / Fucking make the first letters of their first names match.” And between references to the blogosphere (“Just Beneath the Surface”) and Google searches (“Hey Lover”), Dawes indicates that they, too, are residents of our decade, not the ’60s or ’70s.

They also take bold turns with subject matter, like how Goldsmith sings from a female perspective on “Most People”, which chronicles a dejected girl on the periphery of social cliques: “She hears pieces of arguments, beginnings of jokes.” Goldsmith’s heroine feels like “an image that resists interpretation,” and presupposes her fate of loneliness and alienation (“Most people don’t know what it takes to get me through the day”). Yet with a buoyant touch of relent (“She doesn’t know that most people feel that same way”), the track ends on a note of promise.

Despite ditching ATO Records and enlisting producer Jacquire King (Tom Waits, Norah Jones) to expand their horizons, the album channels the strongest elements of their previous two LPs. Goldsmith’s clarion diction still brings Dawes’ poetic lyrics to foreground, Wylie Gelber’s pulsing bass grooves are featured to full (particularly on “Someone Will”), and resonant harmonies buttress sentimental choruses. On lead single “From A Window Seat”, jaunty guitar lines slide past Goldsmith’s subtle parallels between a modern day airline passenger and the wayward drifters of old. Reflective ballad “Just My Luck”, packed with a sagacious nostalgia, has Goldsmith serenading us with pangs of regret tempered by hard-earned wisdom and resilience: “I spent my whole life looking forward / But understand it looking back.”

Backend waltz “Stories Don’t End”, a ballad bemoaning the limitations of language as a means of expressing mutable personalities and emotions, has Dawes at its lyrical best. Set to a sparse piano that yanks at the heartstrings, Dawes harmonically whispers: “If I tried to show every side of you through words of a song / I’d say a fraction of what I’d intend.”

A pain-ridden yet unabashed rendering of hope, Stories Don’t End finds beauty in everything from January Christmas lights to the billion-year-old stars they obscure. Building on the alluring guitar solos and gorgeous harmonies that anchored Dawes’ debut album a half decade ago, Taylor Goldsmith & Co. deliver plucky vocals, wry cultural jabs, and inventive time signature shifts to craft a record that is distinctively modern.

Essential tracks: “Most People”, “Just Beneath The Surface”, and “Stories Don’t End”