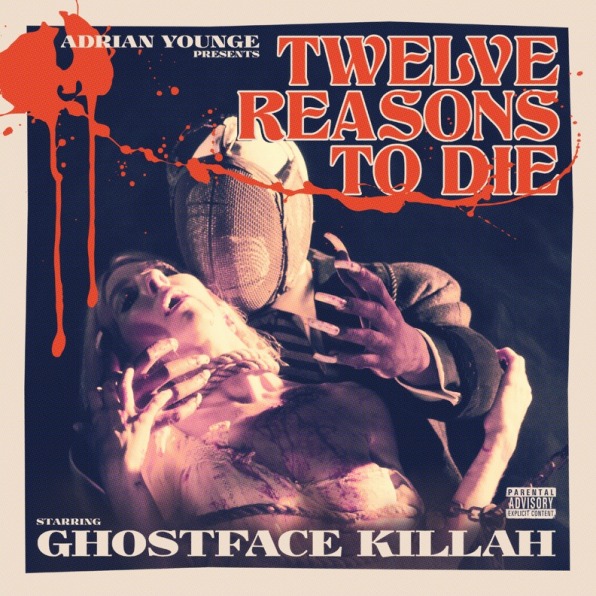 As far as alter egos go, Ghostface Killah couldn’t have chosen a more apropos one in Tony Starks: both he and the fictional Tony Stark/Iron Man made tragic circumstances into triumph. Iron Man turned a kidnapping plot and damaged ticker into a role as Marvel’s elite hero, while GFK spun life in the projects into a reign as rap kingpin. GFK explores those fictionalized origins in a new concept album, Twelve Reasons To Die, with composition by Black Dynamite composer Adrian Younge. But like the character of Iron Man and his many flaws (e.g. women, booze, daddy issues, general insecurity), the 12-track album is plagued by a slew of personal shortcomings, miring what could be a truly heroic effort.

The album works under an imperfect concept, lacking the development to be anything more than something flashy and insubstantial. The arc, which recalls the Snoop Dogg-starring Bones, sees GFK out to destroy the DeLuca Family, only to be set-up by his beloved and return as a vengeful spirit/morality tale. Still, it’s hard to feel sympathy when he not only deserves to die for his murderous ways, but there’s no sense of closure. He’s learned nothing and sacrificed almost nothing; if anything, his loss of life gave him a better existence, making the sacrifice-pay-off dynamic worthless. Even when he contemplates how to deal with his ex-girl in “The Sure Shot (Parts 1 and 2)”, his complete ineffectiveness (let her go or keep her as a pain slave) ruins a perfect moment for emotional connectivity. He simply gets what he always wanted, power through violence, and nothing’s changed either way.

Bad plotting aside, the saving grace should have been Younge’s live compositions/production, forged in the long tradition of blaxploitation films. The problem is there’s a disconnect between the production and the emotional content of the pieces, which harms some of the potentially evocative moments and spurts of deeper substance within the album.

“Blood on the Cobblestones” is a huge moment, where Starks asserts himself as a rising force in the criminal underground with a blitzkrieg of blood (“Judges get kidnapped / Casualties get decapitated / Starks rise above all / To be emancipated / Black Godfather / Families at war / Drive bys and Molotovs / Settle the score / Bourgeois shops are filled / With chopped up causalities”). What should be this terrifying moment is made laughable by a combo of squeaky horns and pitchy turntable scratches. The same goes for “Murder Spree”: here, Ghost Starks is ready to brutalize his usurpers (“You got no heart, I’ll hunt you down like Cape Fear / Push your brains out the back of your head, blow off your hands / Leave your body in a dumpster, head in the trashcan”), but that random barrage of hackneyed piano and irritating cymbal crashes does not reflect that sense of vitriol.

Still, not all of Younge’s contributions are as disruptive. “The Center of Attraction”, wherein GFK and his Theodore Unit partner Cappadonna argue over the former’s girl, is built on a crossroads of love, jealousy, distrust, and loyalty. Appropriately, Younge responds with a beat of pure dichotomy, with the beat behind GFK containing the sweet and subtle strings of burgeoning romance, while Cappadonna’s discord is backed by a faster, more menacing orchestration. When Cappadonna’s words crack GFK’s shell, we get the paranoia of “Enemies All Around Me”. Wracked by doubt and uncertainty, GFK feels the walls closing in and the end drawing near. The track’s mix of warm electric piano and lonesome guitar, not to mention The Delfonics’ Williams Hart’s stirring chorus, reflect his feelings of loneliness and insecurity.

As the songs’ success relies on such subtle decisions, the album’s plotting could have used an equally-light touch. The concept, not to mention lazy narration from executive producer RZA and an accompanying comic book, beats the plot into us. Without keeping the concept in mind, the songs can really begin to flourish.

The GFK-Cappadonna interplay in “The Center of Attraction” needs no outside structure; the slow-building anger and resentment between these two friends is so palpable that one could imagine them coming to blows afterward. Without the precious context, “I Declare War” isn’t merely some warm-up to destruction, it’s a self-contained proclamation of intent, a battle cry to declare GFK’s mighty return. A similar phenomenon occurs in “Rise of the Ghostface Killah”: he’s not coming back from the dead, but re-affirming everything he’s about (“Black superhero, crime boss arch nemesis / Good versus evil since the first book of Genesis / Battle to the end that’s the way of the thriller”) to the solemn reverb of electric guitar.

GFK’s real life story, his lyrical prowess, and his years of wisdom and insight are better than the sum of this concept album. Keeping him tied to a half-hearted story of ghostly gangsters and empty revenge plots is like the actual Iron Man only using the MK I armor when the Bleeding Edge armor is in the next room. Had GFK’s focus been on par with his corresponding hero’s repulsor beam, this record would’ve been more than a solid collection that fails in trying to make high-art with a half-hearted storyline.

Essential Tracks: “The Center of Attraction”, “Enemies All Around Me”, and “I Declare War”