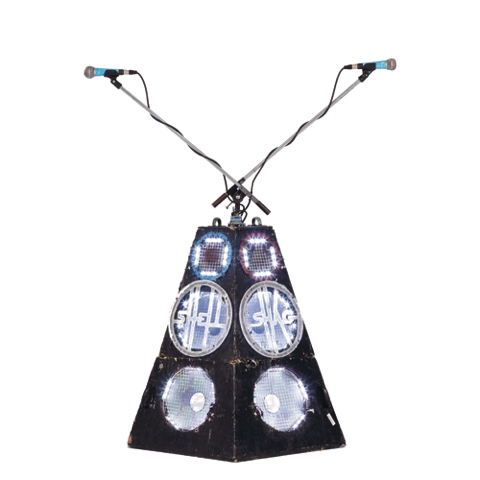 Against all odds, Brooklyn duo Shellshag actually write funny songs. Credit the long-term relationship of chief songwriter John Driver and co-vocalist Jennifer Shagawat. They’re a couple that have spent their time together writing songs since 1997. They even constructed the DIY microphone monstrosity depicted on the album cover just so they could face one another during shows. They’re a cute and quirky pair, but what makes them click as a musical duo is their totally transparent demeanor. The lo-fi pop songs of Shellshag Forever are honest and direct — extensions of the duo’s personality.

Driver writes most of the lyrics, and he’s a sappy romantic in the Jonathan Richman mold. “I’ll buy us both root beer floats / Take a ride on a banana boat,” he sings on opener “Face to Face”. He’s not gifted as a vocalist, but he makes do, settling into a deep baritone that’s reminiscent of Beat Happening’s Calvin Johnson.

Driver lets his voice get away from him, which results in some of those funny songs. He sounds ridiculous on “Driving Song”, over-enunciating every word (for hilarity’s sake) as he gives advice to people in various conflicts, including a nervous teen who phones a girl (“Don’t hang up this time”) and an individual being coaxed by a preacher (“Bullshit, bullshit, bullshit, this man is a liar / Liar liar pants on fire”).

Shellshag is just drums, guitar, and the harmonized voices of Driver and Shagawat. But the songs don’t require anything else. The band’s humble, humorous personality shines through on its fourth LP, and while Shellshag Forever isn’t going to define genres or push boundaries, it’s a charming record — one that makes you smile.