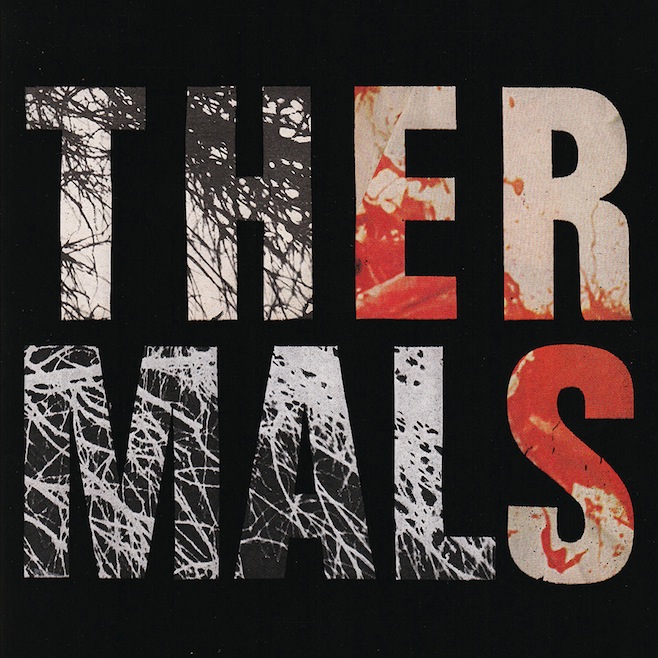 Throughout their 11-year career, The Thermals have thrived on endearing, wise, snotty, righteous anger. Their best albums directed that fury into a narrative both personally relatable and open for interpretation. At worst, the angst wound up marshalled in an over-general context, but even these tunes were enough fun to pogo right past the too familiar lyrics. On their sixth studio album, Desperate Ground, Hutch Harris digs into an album of laser-focused themes, dishing out track after track that blends aggression, heartbreak, and war. While masterpiece The Body, The Blood, The Machine achieved this same task in spades, Desperate Ground feels less righteous and ironic without the Dubyah & Guantanamo backdrop.

Placing any album up to a band’s creative peak is an unnecessary challenge, but Desperate Ground thematically links itself to The Body like an extra stretch of barbed wire fence. The album opens with a song called “Born to Kill” (recalling “I Might Need You To Kill” pretty blatantly) and its two-minute melodic punk isn’t interested in rewriting the musical tropes. Fueled once again by a religious fervor (all of the violence is committed “when you command”), Harris shouts his heart out, insisting that “I will not be denied my destiny.” While in the past he was escaping an insane world, he’s now standing his ground, willing to test his mettle against the insanity.

While not explicitly a theme album, Desperate Ground seems to be sung from a single point of view, a lone soldier in the darkness, trying to fight his way home. Where that home is, who he’s fighting for, and who he’s fighting against all fade into the background, the mere act of fighting dominating the lyrical scope. “The Sword By My Side” is the warrior’s anthem, exalting his righteousness. “The hand at the end of my arm holds tight / knows what we fight for,” Harris crows, Kathy Foster’s lumbering bass matching his charge step for step.

The certainty of this aggression may have his blood running hot, but flashes of romantic difficulty persist (as they seem to be wont to do in foxholes, if movie history is any indication). While at first the thought that “I Will Go Alone” seems destined and powerful, “You Will Find Me” reintroduces the other. The rich, fuzzy power chords thrive atop drummer Westin Glass’ enthusiastic pounding, the protagonist dipping into a relationship where he once spoke of battle. “I’m losing my light, I struggle to see,” Harris clangs, later  insisting that an unidentified “you” will find him eventually, broken and defeated.

Without the surrounding context, the song could easily pass for a venomous breakup track, the you an ex who he wants so badly to realize how she hurt him. Maybe, then, the “war” is an allegory for a difficult relationship, Harris’ narrator digging in his heels and fighting for someone. Later, though, “Faces Stay With Me” talks of the “friends I’ve lost” rather than a single loss. Again, this could be fallen comrades, or it could be friends and lovers who have fallen behind. The Thermals leave this masterfully unclear, allowing any and all struggle in life to fit the arch narrative, complete with its moments of insistence, denial, and dilemma.

The Thermals do what Green Day seemingly can’t anymore: they make anthemic punk-tinged pop that provokes serious thought and demands to be sung along to gleefully. The churning, yelping “Howl of the Winds” ratchets up a storm siren chord progression, Harris picking apart his place in the chaotic world, discussing how “the will to live, it slowly faded.” Late in the album, though, the darkness curls away some, as it should be with The Thermals’ brand of Jolt-fueled pop-punk. “I will love you when I can, when I can,” Harris shouts through the guitar on “Where I Stand”, that fluorescent heartbeat followed immediately by “Our Love Survives”, an insistence that love destroys all obstacles and lives forever. He’s fighting, struggling, killing, and dying, but when he’s doing it with love in his heart, it’s the good fight.

Essential Tracks: “Howl of the Winds”, “Born to Kill”, and “Where I Stand”