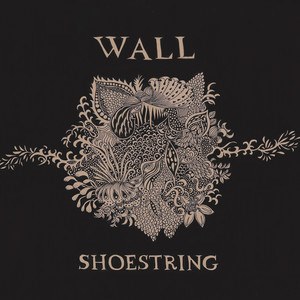 They always say that you should pay attention to people who do more listening than speaking in conversations—the quiet ones. Often they’re the ones who are calmly confident, patiently sitting on a golden egg that’s going to hatch any minute, while the rest of us chickens are running around squawking about all the things we only plan on doing, desperately trying to figure out how to lay our own damn eggs. In this case, the golden egg is Shoestring, the new EP from Lyla Foy, aka WALL. The London-based producer/writer/vocalist is nothing like a chicken—that’s enough of that dumb metaphor anyway—but her music is subdued enough to get lost in the shuffle, while nuanced enough to get lost in.

Muted bass lines, scattered synths, and sampled beats make up the sparse instrumentation, although much of the time they manage to create the effect of something that isn’t quite atmospheric dream pop, but still more expansive sounding than one would expect from just a bassist and a guitarist. WALL’s breed of minimalist ”pop without the pop production” is fascinating because everything is so simple but, in her gifted hands, is transformed into an undulating waterbed for Shoestring’s five intimate tracks to nestle into.

Try and hear the frantic sound of plucked guitar strings, which form the substructure of the otherwise crawled pace of “Valentine”. Her improvised “mumble vocals” on “All Alone”, mostly make you want to listen harder to hear what she’s trying to stay, rather than leaving you feeling frustrated over not knowing the ultimate meaning of some of her lyrics. It would be pretty difficult to become frustrated listening to that satiny tone anyway—just like you wouldn’t get frustrated if Lykke Li and Cat Power invited themselves over to your house for a slumber party…until they get drunk and spill a big cup of Astrud Gilberto onto your precious Nancy Sinatra and Peggy Lee records. That sounds like something Cat Power would do. (Just kidding.)

That actually just sounds like a confusing way of saying that WALL’s refined tastes and understated voice land her in the same realm as St. Vincent, in the sense that both use electronic elements to create a frame for their classic senses of melody—both timeless and modern. The difference, however, is that while St. Vincent now has the world at her fingertips, WALL has created her brilliant, shadowy sound off of just a shoestring.