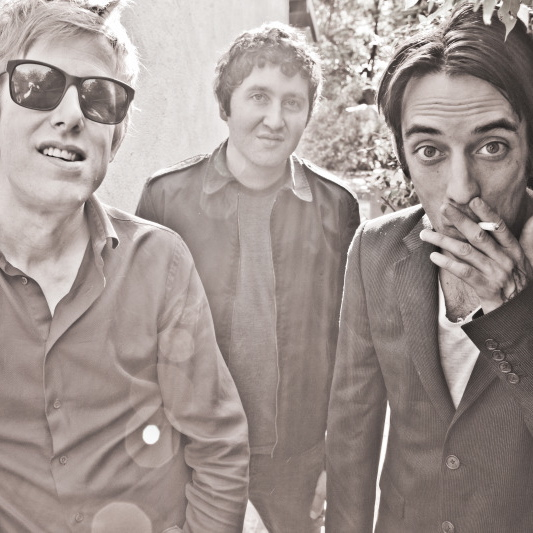 Divine Fits transcended supergroup status almost as soon as they formed. Chalk it up to releasing one of the best albums of last year and slowly building a killer live show. After last month’s victory run through Austin’s SXSW, the quartet is hitting the road once more, despite some of the band members being busy with their own non-side projects. For this new leg, fans can expect to hear tracks from A Thing Called Divine Fits, a handful of covers, and even some new cuts, which the Fits hope to release soon.

Consequence of Sound recently checked in with co-frontmen Britt Daniel (Spoon) and Dan Boeckner (Handsome Furs, Wolf Parade R.I.P.) to discuss Divine Fits’ future, which Spoon lyric no one can get right, Boeckner’s plans for a new electronic project, and traveling on April Fool’s Day.

BD: No, it’s the airport. DFW. Dallas-Fort Worth.

That would be weird if you were at the shoe store.

Dan Boeckner: I’m in Cincinnati right now. I’m looking out the window at the brown and gray expanse of Cincinnati.

I’ve never spent time in Cincinnati. Is there a ton to do there?

DB: Yeah, actually. I like Cincinnati, and I like the kind of post-industrial boomtown of Midwestern cities.

There’s something kind of nostalgic about it.

DB: They had their heyday in like the ’30s and ’40s, so there’s something that kind of reminds me of some of my favorite cities in Eastern Europe, or Moscow. They’ve got that same era of architecture. Western instead of socialist. A lot of factories, a lot of brick. I like that.

Have you ever driven from Chicago into Gary, Indiana?

DB: Yeah, I’ve done that drive a lot, actually. I kind of just like that whole area, the Midwestern states. It’s actually one of my favorite places to go on tour. I remember right around the time we put out the second Handsome Furs record, we did almost the entire state of Ohio, which felt pretty cool.

So, would you guys call this the second leg of the first official Divine Fits tour?

BD: Maybe. I don’t know. I mean, it’s only five shows. We’re doing a lot of little short runs for the rest of the year. Let’s call it the new leg.

Divine Fits’ first album has been out for over half a year now. Do you find that fans are singing along a lot more at your shows?

BD: I do see that a bit. Yeah, we just played a bunch of shows at South by Southwest, and there were a lot of people singing words. That’s always a good time.

DB: That started on a really small scale when we did our first tour before the record came out. We were putting up a lot of videos on YouTube, I think, when we played Austin at Beerland, which was the first official show. We put up pretty much the whole set, and by the time we got to Chicago, people were singing along. But it must have been their own interpretation of what they were hearing. [Laughs.]

I know when I go to a concert, sometimes I’ll be singing along and will get a lyric completely wrong . Then I feel stupid, and I always worry that maybe the artist saw me. Do you ever notice that in the audience?

DB: It’s kind of hard to tell [for me] when you’re on-stage. I’m sure on that first tour before the record came out, people just maybe had the chorus and were making up their own lyrics for the verses.

BD: I see that all the time.

Does it throw you off at all or make you laugh?

Is there a specific Divine Fits lyric that you feel people get wrong all the time or misunderstand?

BD: There’s not one I can think of, but there’s this one Spoon song where people always sing… the lyric is “I got nothing,” and people always sing, “I got something.” It always happens. That’s what’s weird about it, you know? In different cities, I always see that one.

What song is that from?

DB: It’d actually be kind of cool to have people put out a song and not release it typically; just put it up on YouTube and have people write their own lyrics. Have a contest to see who gets closest.

Dan, I’ve noticed some trends in your own lyrics. In “Baby Get Worse”, you sing, “We hit the city, but the city don’t mind,” which is also a line from Wolf Parade’s “It’s a Curse”.

DB: I think I have used that line before. I like that line.

Is that a conscious choiceto use the same phrases in different songs?

DB: It kind of gives like a sort of continuum to my songwriting. I really like writing about specific images. I’m always trying to perfect the way of like saying these ideas, you know?

I’m a big Bruce Springsteen fan, and when sifting through his albums and B-sides, you notice a lot of different phrases he tries out in a bunch of different ways.

DB: Yeah, I think on Nebraska he uses…what is the phrase… I think it’s in “State Trooper”.

“Deliver me from nowhere,” right?

DB: Yeah. Yeah, exactly. “State Trooper” uses the same lyric that I think he uses in “Johnny 99”, too.

It might be “Open All Night”. I can’t remember. I do know that there’s a version of “Open All Night” on the Tracks box set that’s called something else. It’s the same lyrics, but a completely different mood.

DB: I’ve been reading a lot of H.P. Lovecraft lately. He does the same thing in his writing. He’s got this mythos, and he’ll use the same sort of phrases, like an incantation or something. And his literary disciples, they sort of do the same thing. It’s cool. It lends this kind of consistency of vision to his writing. I think if he didn’t have that, he wouldn’t have been as famous. He’s not recycling just one line from a song or a certain image. He’s building his own mythology. As like a diehard nerd, I always like when a TV series or a series of books will reference itself subtly.

I’ve tried to get into Lovecraft for a while. I like a lot of adaptations of his work, but have never just sat down to read one of his stories. Do you find him to be racist? I’ve heard that he was, but wasn’t sure if that comes into play when reading his stuff.

DB: Yeah, in his private life, he was a diehard racist. There’s a really great French writer, Michel Houellebecq, who wrote The Elementary Particles and The Possibility of an Island and Platform, but his first book was a dissection… like an overview of Lovecraft’s work, and he gets well into that. And racism really informed a lot of his later work. But I think you can read Lovecraft and sort of divorce his 1930s, 1920s blue-blood, East Coast, isolated-American mentality from what’s good about his writing.

I’ll have to check it out. I’m making my way through the Dune series right now, so that’s taking up most of my reading time.

Have you read it before?

DB: Yeah. Actually, Frank Herbertthe guy who wrote Dunehe ended up living just, I think 150-200 miles south of where I grew up in Canada. He built this like utopian sort of cottage up in northwestern Washington. And I reread Dune after I found that out. Dune is sort of like a bizarre utopian novel. I love that book.

Me too. Sorry, I’m being real nerdy here. Going back to Divine Fits, on the first leg of the tour, you guys did a lot of other cover songsTom Petty, Frank Ocean. Are you going to do any surprise covers this time around?

BD: No, but we’re playing some new songs of our own.

Anything you can say about the new songs, just in comparison to the first album or where you see the music going?

BD: I think they’re pretty rock and roll compared to the songs we recorded last spring. There’s a new one of Dan’s, which we started playing at South by Southwest, a new one of mine, which we haven’t played live yet, but I’m hoping we will tomorrow. We recorded them both for this single that’s hopefully going to come out in May or June.