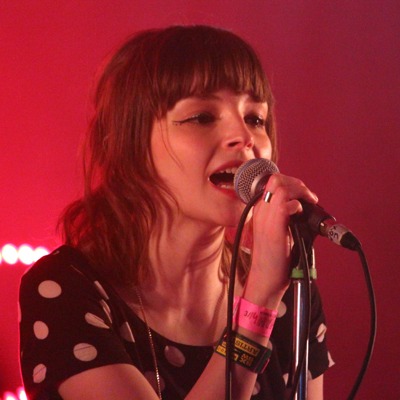 CHVRCHES – Iain Cook, Lauren Mayberry, and Martin Doherty — are back in a Glasgow studio following a string of U.S. shows and last week’s release of the Recover EP. The group was in a jovial mood as they took a break from recording their debut album (due in September) to speak to Consequence of Sound about the SXSW experience, their approach to music, and a love of 80s movie soundtracks.

You were awarded the Grulke Prize for Best Non-U.S. act at South by Southwest.

Martin Doherty: That was kind of overwhelming. It came out of the blue. We had not heard of it before, so when we found out, we were taken aback. Its a really nice thing.

The other winners were The Flaming Lips and Haim. Did you catch any of those acts?

MD: The Flaming Lips are just mind-blowing, man. Their show is so uplifting. I didn’t even try to get to see them [at SXSW]. I figured I’d just spend three hours in a queue outside and miss the show anyway. I have seen them a couple of times, and it was absolutely brilliant.

Did you get to check out any acts at SXSW?

Lauren Mayberry: I think the schedule was pretty hectic, so we didn’t do a huge amount of general gig going, but we did see a few things. I saw Blue Hawaii the first night we were there. And a documentary called The Punk Singer. I’m not sure how long that will take to find its way to the UK because I think they funded it through Kickstarter, so I dont know how wide their distribution is. I saw it on our first day, and I didn’t have a nap the afternoon we got there because I wanted to see the film. It seemed like a good idea, but by the time we played the show at one in the morning, I was like, “Maybe I should’ve had a nap, I’m so tired.”

Iain Cook: We saw Savages. That was one of the most engaging live acts Ive seen in years.

I saw you guys at that late night show at Red 7 Patio, and it was great. But the next time I caught your act was odd, because I was eating free Taco Bell during your set at the Hype Hotel. It was strange to be dancing with the crowd while eating Doritos Locos Tacos.

LM: I don’t understand why the taco shell needs to be flavored. I thought it was the stuff inside the taco that was supposed to be tasty.

At the Stubb’s show you joked about sharing the stage with Kendrick Lamar.

LM: It’s pretty surreal, but from what I can tell, SXSW is overall a surreal experience like that. You’ll be walking down the street, pass by someone, and you have several albums by them.

MD: At the Stubb’s show, [the fact] that Kendrick Lamar and Solange were on after us was kind of overwhelming for me. I hid in the corner. [Laughs.]

LM: Your mind was blown in the backstage area. You were like, “Oh my god, they are right there.” And we were like, “Be cool, be cool, dont look at them.” But I don’t think they noticed, so it was fine. [Laughs.] The key is to take selfies on your phone while standing quite far away but then use the scale of the photo to make it look like you’re right next to them. You don’t pester people. You just go stealth.

IC: They probably did notice the really sunburnt Scottish people.

LM: We are not meant to be in the sunshine. [Laughs.]

Do films, books, or other works of art ever find their way into your music?

IC: I do think there are a lot of ’80s electronic film soundtracks that we love. Both consciously and unconsciously we draw some inspiration from them.

MD: Are you going to talk about Brad Fiedel?

IC: I wasn’t but now that you mentioned it. [Laughs.]

MD: I’m certainly influenced by a lot of ’80s cinema soundtracks. Horror soundtracks in particular.  Once I wrote to Charles Bernstein, the guy who scored A Nightmare on Elm Street, just a total fan letter.

LM: And how old were you when you did this?

MD: It was like a year ago. [Laughs.] He got back to me. That was a real highlight. It was just this positive message of, “I hope you make it and thank you very much.” That meant something to me.

IC: We all grew up watching a lot of ’80s movies, and that stuff just becomes embedded in your consciousness as much as the music you grew up listening to.

LM: I think film slips into our aesthetic on early artwork and albums covers. Someone drew something for us with our logo that was Videodrome-inspired.

It was fun to see all three of you make an Alfred Hitchcock-type cameo in the new music video for “Recover”.

IC: What do you mean you aren’t good at acting?

LM: I just feel it in my bones. It’s been a long time since I’ve done plays in school, but I was really crap at it. Like really crap. The poor person doing the video editing has to look at all your awkward hand shaking because you just hate it so much. So I thought it was nice that [in the “Recover” video] we are looking like we are making an artistic statement and also we don’t have to be in them yet.

MD: The secret fact about the band is that Lauren is actually amazing at impersonations.

LM: Well that’s not going to come across in the video now is it!? [Laughs.]

MD: You should hear her at karaoke doing “I want You Back” by the Jackson 5. It’s absolutely mind-blowing

LM: Its all about the passion and the place where you pinch the bridge of your nose. If we pitched that as a music video, we’d get told to go away. [Laughs.]

Lauren, I understand that you have a law degree and a master’s in journalism?

LM: It is weird when people ask it, because it’s strange to assume that no musicians anywhere have ever gone to school. I don’t think intelligence is necessarily tied to schooling. And just because I did a lot of schooling doesn’t necessarily mean I’m intelligent. People say, “Oh wow, when did you decide you were going to give up on that and begin to pursue a music career?” But I don’t think thats how people operate. I worked jobs but also pursued music. I didn’t put all my eggs in one basket. I was just lucky to have a job that I loved outside of music.

MD: I think if we are struggling for an album title, we should call it “The Miseducation of Lauren Mayberry”. [Laughs.]

LM: But it’s not a miseducation, because I’ve been able to use it for the powers of good. Well, I hope.

IC: The Overeducation of Lauren Mayberry?

LM: But the law thing is helpful when proofreading agreements and giving you two guys highlighted copies.

MD: When you say helpful, it just means that Iain and I don’t have to read them. [Laughs.]

LM: But I do think music is more about personality than education. I’m entirely sure that most of the bands I love dont have people in them who have gone to music school. Not that there’s anything wrong with that, but that on its own won’t make you a good band.

MD: What I took from studying music was what not to do as opposed to what to do. If that makes sense? I was around a lot of people who were exceptionally gifted in terms of their technicality who didn’t know when to shut up.

IC: When not to play.

MD: Yeah, it’s a classic thing, almost a bit of a cliché, but it’s so true. I was surrounded by these guys who could play guitar so fast [laughs], but that doesn’t mean it sounds nice, and it doesn’t please anyone other than yourself.

LM: That space can help something else to stand out in the song.

Why did you choose to include two “Recover” remixes from other artists on the EP?

LM: I’m sure some bands get pissed when other people remix their stuff, but I like that aspect of it. If a person hears something and it inspires them to make a new thing out of it, then that’s really cool. We chose CID RIM and Curxes because those are two artists we’d like to work with.

MD: Yes, they are artists we appreciate. The CID RIM album that came out in 2012 [CID RIM] was one of my favorite records. It was a total no-brainer. We asked him, and when he said yes, we were flattered and delighted. And with Curxes, we heard about them through their similarly bad command of spelling. [Laughs.] Once we listened to Curxes, we thought they were quite good. The remixes on the EP come from artists we are excited about.

Martin, along the theme of bad spelling, is the song “ZVVL” actually about ZUUL from Ghostbusters?

LM: Somebody asked us that on Facebook the other day. What does this mean?! and I just posted the clip of Sigourney Weaver in bed.

I included that exact clip in my review of Recover.

LM: [Laughs.] There you go. A simple Googling will see you right.

LM: And Sigourney Weaver in general. I’m often influenced by the line, “Get away from her you bitch!“

God, Aliens is such a great movie. Ghostbusters too. And to think, if it wasn’t for those films, there’d be no CHVRCHES.

You’ve put out a lot of material already and are building quite a resume. I know the EP was just released, but I have to ask, how is the album process going?

MD: Indeed. We’ve actually finished tracking on what we perceive as the album. So, the pressure is sort of off at least for that part. But it’s important for us to release things at the right time and not disappear for too long. I think we might release one further single or some music on the internet as we roll toward the album coming out in September. The good thing is we now have three weeks of studio time with the pressure off and a bunch of writing time. Everyone keeps saying to me that’s when the exciting stuff will happen.

MD: Yes, they say no more pressure, but then they tell me we will write our best songs in the next three weeks. I guess we’ll see. We try to keep our eye on the creative process. Hype can be a very dangerous thing for a band because you can be gone as soon as youve arrived if you don’t fulfill your end of the bargain.

LM: But its also easy for us to say that because for all you know we are sitting around in chinchilla coats like in American Gangster and using butlers as human chairs.