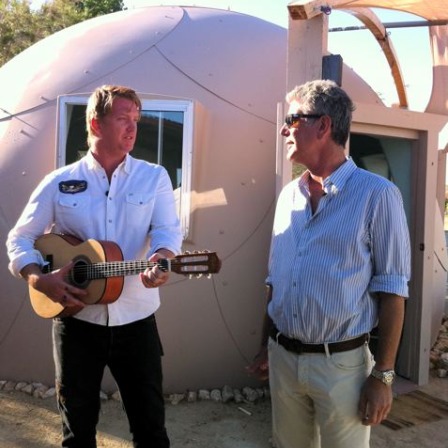 Anthony Bourdain’s broke bread with plenty of rock stars on his television program No Reservations (The Black Keys, Neon Indian, and Sleigh Bells, just to name a few), but his relationship with Queens of the Stone Age frontman Josh Homme extends far beyond a television cameo. Homme appeared on No Reservation twice, including one epic episode which saw them eat Tex-Mex, get drunk off tequila, and record a song documenting Bourdain’s time in SoCal’s High Desert. It seems their time together left such a lasting mark on Bourdain that he tapped Homme and Mark Lanegan to record a theme for his new CNN program, Anthony Bourdain: Parts Unknown.

Ever the incredible wordsmith, Bourdain said in a statement: “When you hear the new title music for Anthony Bourdain: Parts Unknown your head will explode, leaving only a smoking stump. When we heard what (Homme and Lanegan) had come up with, there was weeping and jaw-droppage.”

The first episode of Parts Unknown aired last night, and the replay is streaming in full on CNN’s website (scroll to the :50 mark to hear the theme song).