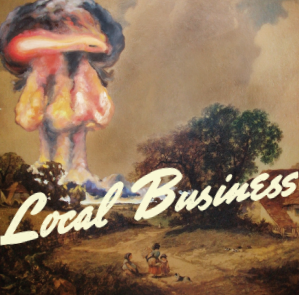 Titus Andronicus’ Twitter account is a wonderful thing. All day, frontman Patrick Stickles has been posting anecdotes about the band’s history, be it a link to the “#ULTRARARE” 7″ single currently available on eBay, or an explanation for why the band scrapped the original artwork for 2008’s The Airing of Grievances (“1,000 copies were made with that cover, before Troubleman Unlimited CEO Mike Simonetti had second thoughts… ‘Bring me a cover that doesn’t look it was designed by a five year old,’ he said, hurting the feelings of the fragile artist (me)”).

He also encouraged fans to share with him the band’s vinyl-only live album The Innocents Abroad, and after being “liberated from its vinyl prison,” he uploaded it for free download. The eight-track effort features recordings from the band’s February 23rd, 2009 show in London, and is heavy on material from The Airing of Grievances. Download it here.

Also unearthed today: the rejected artwork for Titus’ third album, last year’s Local Business. As Stickles explained, “The conscientious people at @XLRECORDINGS did reject a cover we submitted once though…Why was this cover #BANNED ? I’m sad to say it’s not for any juicy or provocative reason…We saw this painting at these guys’ house in MPLS we stayed at back in ’10 but it had been bought at a garage sale so the artist was unknown… So @XLRECORDINGS feared the artist would come out of obscurity for revenge, ala the lady on the cover of @vampireweekend’s Contra album”.

Here is the rejected artwork in all its glory: