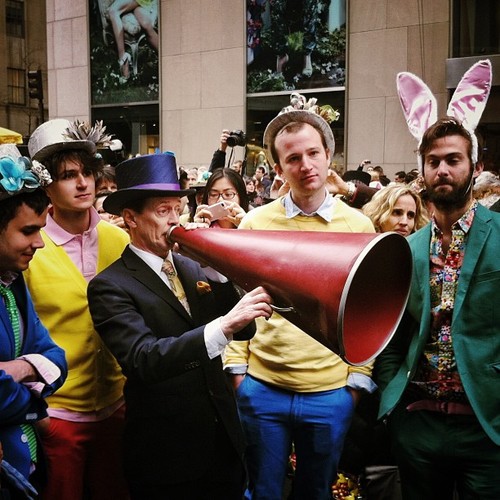 On Friday, Vampire Weekend announced on Twitter that bassist Chris Baio recently discovered he is a distant cousin of actor Steve Buscemi. “He has reached out to Mr. Buscemi who was VERY EXCITED about the connection. We are thrilled about the potential for showbiz synergy,” the band noted and also included the picture you see above.

Then, on Sunday, this happened:

There was also a moment yesterday which saw Buscemi singing Vampire Weekend’s new single “Diane Young” from a megaphone:

So what’s the deal? Was Baio just spending the holidays with family? The band’s publicist has yet to respond to our request for comment, though based on the cameras appearing in several of the photos, we’re guessing they may have been filming a music video.

Vampire Weekend’s new album, Modern Vampires of the City, arrives May 14th via XL Recordings. Thanks to Team Vampire Weekend for the photos and video.