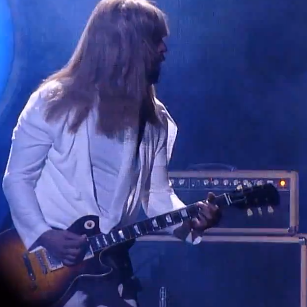 After cracking the case, Grohl and Foo Fighters bandmate Taylor Hawkins donned their ’70s Rush kimonos (!) and performed “Overture”, off Rush’s seminal 2112 album. Further proving just how cool they are, the actual Rush then joined the duo for rousing versions of the equally-classic “Tom Sawyer” and “The Spirit of Radio”. The entire performance was not only a slice of prog goodness, but an unabashed moment of rock geekery for a truly deserving act. Watch the replay below.