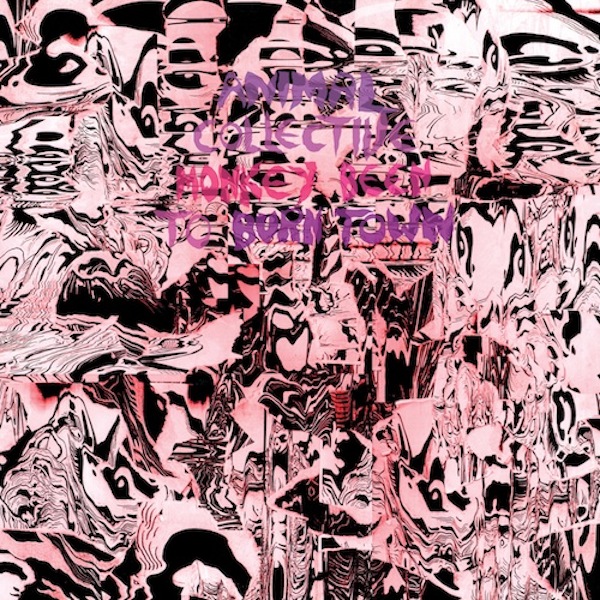 “Out of my body, out of my mind,” echoes Shabazz Palaces’ Ishmael Butler over the duo’s remix of Animal Collective’s “New Town Burnout”. In eight short words, Butler epitomizes the effect of an AnCo listening experience — an experience amplified here by the broken sci-fi score of Shabazz beatsmith Tendai Maraire.

Originally an instrumental produced by Panda Bear at the tail end of his Tomboy recording process, “New Town Burnout” made its way to 2012’s Centipede HZ as a straightforward (for AnCo) psych-pop burner. Shabazz Palaces have taken the track’s stems and deconstructed them into an experimental hip-hop effort that follows in the genre-bending exploits of Saul Williams and Death Grips. Tagging the track with an original, highly augmented 16-bar verse, the duo made the track their own monster rendering any true artistic comparisons between the two versions null.

To complete the four-track remix EP, AnCo have pulled together experimental pop artists (Brian DeGraw of Gang Gang Dance and the duo behind Teen Girl Fantasy] plus the talents of famed Chicago footwork forefather Traxman to supply reworks of analog-adventure “Monkey Riches”. The original effort lends itself nicely to the tribal-futurism of GGD and electro-ambience of TGF, but in an ode to true ghetto-tech, Traxman offers a highly syncopated reimagining of the track that pulls AnCo fans from their cozy living-room chairs to the Chicago underground.

Whoever believes that dance music has hit a state of homogenization (eyes trained to you, Daft Punk) definitely hasn’t been listening to the same discs as Animal Collective. The guys from Baltimore prove that only two tracks pulled from the same album can be the impetus for limitless creation.