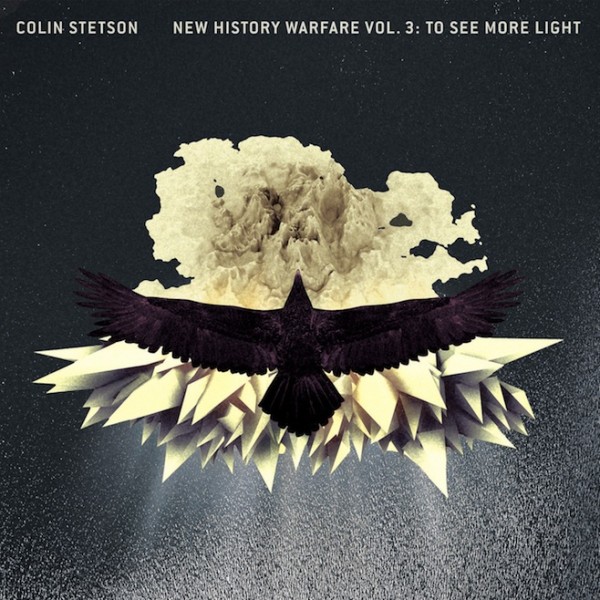 Colin Stetson is a classically trained saxophone player who uses circular breathing to play more notes in a song than Steve Vai and Joe Satriani combined and plays them on the outré four-and-a-half foot tall bass saxophone. That would ostensibly make Stetson something like a prog musician, no? That word “prog” — one of the more vulgar invectives in music. Prog means lauding technique over emotions, showmanship over honesty, 7/8 over 4/4. The stigma of prog is that it’s music of the bourgeois and the privileged, dismissed easily as a selfish exercise with no politics, no agency, or worst of all, no soul.

And in addition to the circular breathing, the tens-of-thousands of notes, and the non-canon woodwind instrument, Stetson also — somehow — sings through his mouthpiece while he plays, creating these avian melodies over thatches of saxophone arpeggios. Maybe other saxophone players see him as the Cheap Trick of the saxophone, a gimmick like Rahsaan Roland Kirk playing three saxophones at once or Michael Brecker doing a stunt spectacular on an EWI. His tone is far from that of the classical saxophone tone, and he doesn’t improvise his way around jazz charts. He’s an outlying rebel in the classical and jazz words, so of course the degenerates of rock and experimental music welcome him with open arms and standing gigs with Bon Iver and TV on the Radio.

But to most ears, Stetson’s music is hard to classify. He’s more interested in masking the technique it takes to produce these sounds; sounds that so few people even understand in the first place. The strange frequencies and wave forms he creates are a paradox: they are alien but human, technically astounding but filled with passion — the saxophone acts as a medium of expression tied to his whole body. You can hear the key pads thwacking against the sound holes. You can hear him sneak a breath at odd intervals. You can hear emotion cook from his diaphragm. This isn’t prog.

And if you took one thing away from that Bikram Yoga class, it’s that our life is connected to our breath. We breathe or we die. The saxophone becomes not only an object of expression like a guitar but an extension of Stetson’s voice. There’s no Peter Frampton talk box, there’s no Fruity Loops, there’s just this unrelenting physical force, sometimes violent sometimes serene, that breathes and breathes and breathes.

For three volumes in the New History Warfare, that’s what Stetson has been doing. He’s found a way to obscure and subvert his emotions in way that transcends “prog” and technique until it becomes just a wholly singular form of expression: Stetsonesque ragas. Vol 3: To See More Light is his strongest and most cohesive collection in his career, aided in large part by the head-turning vocals of Justin Vernon, who appears on four of the 11 tracks on the album.

Vernon’s voice in Bon Iver is often texture over clarity, like the dense collage at the end of “The Wolves (Act I and II)” or Kanye’s favorite loop in “Woods”. Vernon takes a page out of Stetson’s all-in strategy and performs not only his brumal falsetto, but strays into a beer-tent blues voice on “What Are They Doing In Heaven Today?”, and a pig-fuck hardcore bark on “Brute”. Vernon’s horrifying screams are just a shred of truth away from literally unbelievable. You’d think it was a Dominick Fernow from Prurient or just a poor soul in a torture porn movie if it didn’t say J. Vernon right there in the liner notes.

Of course in Stetson’s world, in the New History Warfare trilogy, Vernon can sound like that. The language of the album is so foreign, its etymology so obscure, that accepting musical anomalies become apart of the language itself. Vernon sounds like Dave Matthews, Stetson sounds like a lost whale — whatever kind of corollary you want to draw to try to translate the immense language that Stetson sings in.

It’s not always easy to do. Stetson finds notes buried in other notes, microtones, and harmonics that leak out of his saxophone fill the air with a gigantic spectrum of sound. There’s so much sound that unless the aural apertures are all the way open, his songs hardly fit in the ear. The album’s centerpiece, the 15-minute title track, is enormous enough, but the drama and drone has a plot like a war film: a battle in a hail of trills and scales, respite and contemplation in the dust it kicked up, and a slow funeral dirge to march us off. It’s demanding, but with Vernon always nearby to help organize the chaos, and little recapitulations of melody lines from “High Above the Grey Green Sea” in “Among the Sef”, there’s enough buoys to get a sense that there’s land here…somewhere.

Which brings it back to the paradox of the album, and even perhaps its language. While Stetson’s harmonies sound random or even aleatory when you consider a saxophone’s physics, every song is grounded in rhythm. The cylinders that drive the dynamic ”Hunted” come from Stetson’s breath, the most human thing there is. As otherworldly as he sounds when he let’s out a yawp and his saxophone starts ravenously chewing on some baritone notes like a hungry dog, there’s a direct connection to who Stetson is, his emotions, his beliefs. He’s closer to Tuvan throat singing than Albert Ayler, and maybe closer to Swans’ noisy dramas than to John Coltrane, but the language of all of those artists melt into his work. It’s the closest thing to a universal language music has to offer — and you’ve never heard anything like it.