Gambles – Far From Your Arms EP 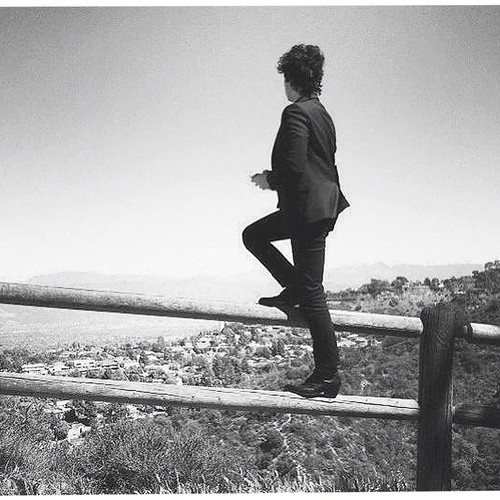 Just like “Scarborough Fair” completes The Graduate and Elliott Smith is all but a character in Good Will Hunting, the debut EP from Matthew Daniel Siskin, who writes and sings as Gambles, seems primed to soundtrack some future drama. Sparse and enigmatic, Far From Your Arms snakes between affection and danger, hope and guilt. Villains lurk out of sight, while loved ones drift in and out of focus. A screenwriter could easily uncoil a feature from Gambles’ breakout track “Safe Side” the way Robert Altman found McCabe & Mrs. Miller inside Leonard Cohen’s “The Stranger Song”.

Cohen is a ready analogue to Gambles’s dark guitar and echo-fringed voice. Siskin also considers himself as much of a poet as a musician; his Tumblr is filled with screenshots of words stamped into Photoshop and iPhone screens. Most of the language spills unfiltered, though he’ll black out choice words with the brush tool or share gifs of himself editing a Tweet. The unhinged publication evokes Daniel Johnston’s constant scribblings, only posted up for all the world to see.

Gambles chooses his words more carefully on Far From Your Arms. On “Safe Side”, he traps his narrator in the bad guy’s boots. ”Wherever I stand / I damage”, Siskin sings dolefully, as if struggling with whether to own up to his own viciousness. “Trust” strikes a similar darkness as it traces a relationship’s bitter decay. “California” and the EP’s title track sing a lonely affection to a faraway object. These sweeter tracks feel more immediate, less grandiose; Siskin writes them from experience, not archetype.

Despite some clumsy phrasing (it’s jarring to hear “thee” in 2013, even inside a bare-bones acoustic track), Gambles’ first self-released offering finds strength in the quantum state between love and violence. He flips the coin and asks you to bet.

Essential Tracks: “Safe Side”, “Far From Your Arms”