Sun Kil Moon and The Album Leaf – Perils From the Sea 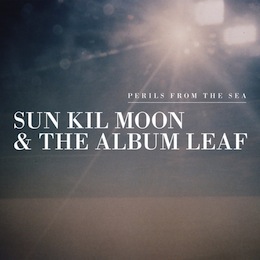 Perils From the Sea comes about five years too late. I make this assertion for a pair of reasons. Perils is a collaborative album, one that splits the difference between Sun Kil Moon’s Mark Kozelek and the Album Leaf’s Jimmy Lavalle so neatly in half it may have been made on perforated paper. It seems about five years too late firstly because it’s been about five years since those two names drew a crowd, unfair as that may be. And secondly, it seems five years too late because the sound the pair chase– a sort of Postal Service For The Painfully Alone thing that Kozelek lends the grace and humor of his lyrics and the laconic power of his voice– feels as though it may have sounded less dated in 2008.

If you’re at all familiar with Kozelek’s work with Sun Kil Moon (or his earlier work with Red House Painters), or familiar with Lavalle’s records as Album Leaf, Perils From the Sea offers exactly zero surprises. It sounds exactly like what you would expect from these two. Kozelek’s strained pseudo-monotone dances around alternately harrowing and hilarious character portraits while Lavalle crafts tracks that conjure the identical pretty, pleasant, and occasionally powerful melodies he’s been recreating since 2004’s In A Safe Place. Even if the approach is slightly less ornate than the Album Leaf’s last few offerings, it’s still decidedly Lavalle’s aesthetic.

This isn’t a bad thing, per se; both of these guys are good at what they do. And songs like “Gustavo” and “Ceiling Gazing” are so indicative of each performer’s strengths that they would rank high in the canon of either artist. But that also doubles as a backhanded compliment. Perils‘ biggest strength is also its biggest weakness: even at its best, it merely recalls the strengths of its individual players, instead of charting its own course.