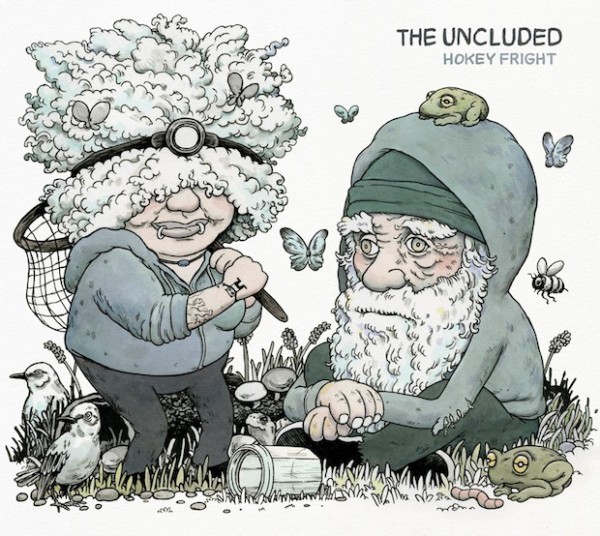 Hokey Fright was born from talking about “mortality” and wanting to explore questions that have no answers. The result is a very adult meditation on life, backed with a playful sense of childlike wonder. The most introspective of the tracks, “Teleprompters”, features Aesop rapping about shutting himself off from the world (“You need to get out more / Never, I am nailed to the walls in a jail made of deserts”) and Dawson singing about her own way of shutting everything out (“Ever since I was a kid, on the backs of my two eyelids / I hid two teleprompters there transmitting words from who knows where / And this is why when I’m on stage my eyes are closed.”)

The songs at times lean more toward one artist or the other, such as in “Jambi Cafe”, where Dawson’s jaunty folk takes hold and Ace comes to her level with a nursery rhyme delivery. On the following track, “Bats”, Rock takes the lead with a harder 8-bit story of feeling lost, rapping, “My feet hang off of every bed I’ve ever slept on / Catch less z’s more f-bombs,” while Dawson sings the chorus: “…then your mind’s rind peels back, revealing every dead friend on the back of a little black bat.”

The best mix of the two comes on the infectious “Delicate Cycle”. Dawson supplies a foot-stomping beat and guitar, and her vocals overlap with Rock’s rising and falling flow, braced by the chorus chant, “My whole life is a delicate cycle.”

There are 16 tracks on Hokey Fright, and that’s probably two or three too many. The short interludes (“Superheros” and “WYHUOM”) break the album’s pace and hold back some of the flow. Overall, though, the combination of Rock and Dawson is undeniably addictive. While the questions may not have answers, the music moves you to a new place.