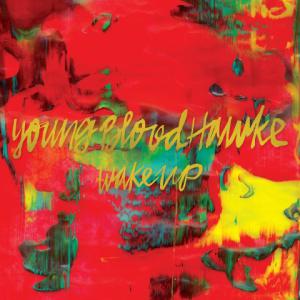 The LA synth party that is Youngblood Hawke was born out of founding members Simon Katz and Sam Martin’s frustration with where their previous band was going; they wanted to make a fresh start. They grabbed three friends, formed Youngblood Hawke, and with the release of their first LP, Wake Up, they’ve arrived guns-a-blazin’ with happiness.

As if the title wasn’t a call to attention, Wake Up is a non-stop onslaught of California-sun-soaked joy for your ears. The opening track, “Rootless”, opens with a chorus of “ahhs”, shimmering guitars, and Phoenix dance drums under high tenor vocals. The chorus amps up the tinny cymbals and keyboards so that they wash over you like a totally killer wave.

The entire album is like this. However, once you get past those first five songs– including lead single “We Come Running” and the most Phoenix-like track, “Dannyboy”– there’s a pervasive sense of repetition. The band is so deft at writing hooks that the songs become overburdened with them. The sequenced keyboards on top of chorus vocals on top of chugging guitars in “Say Say” are good, but after repetition both in the song and across a 12-track album, it’s too much sunshine. Your ears feel sunburnt, and no properly skeptical (or sane) music fan can indulge all the smiles the music is meant to induce.

Wake Up is happy and very danceable, but it should only be consumed in small, commercial, or movie trailer-sized doses.