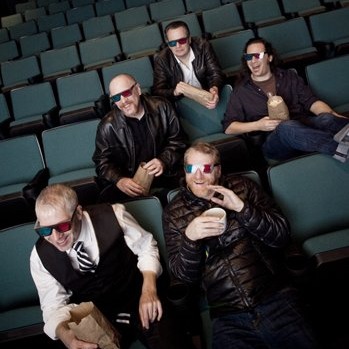 Welcome to Dissected, where we disassemble a band’s catalog, a director’s filmography, or some other critical pop-culture collection in the abstract. It’s exact science by way of a few beers. This time, we sort through the best and worst of Camper Van Beethoven, and with a little help from a friend.

This is usually the part where we’d say, “Welcome to Dissected, where we disassemble a band’s catalogue in the abstract. It’s exact science by way of a few beers.” But here’s a curveball for everyone: we’re gonna flip the script and let an actual band do all the heavy lifting. And perhaps there’s no other outfit better suited for this little experiment than California’s own Camper Van Beethoven.

Formed in 1983 in Redlands, CA, Camper came of age in a time when every young male musician took their unkempt angst and joined a punk band. But before note one on album one, the band transcended such limitations, utilizing the unique station of their eventual home base of Santa Cruz (purportedly the surfing capital of the U.S.) to conquer the seas of many a genre. Punk, classic rock, country, folk, indie rock, prog, bluegrass, NorteÃ±o, ska: they didn’t just cite influences; they blended these living, breathing cultures in new and interesting ways from song to song, album to album.

Along the way, the group experimented with song structures and politically motivated content, displaying a childlike wonder and playfulness toward the ceaseless possibilities of music. While their recorded output may have put them in the category of faceless alt-rockers or jam band nut jobs, Camper Van Beethoven is a rare and mythical creature, with loyalties to nothing but where to go next.

While their creative pursuits (not to mention inner turmoil) eventually led to their breakup in 1989, the band rebounded in the early 2000s, recording two new records, including January’s La Costa Perdida, not to mention logging countless hours on the road in the last decade. While plenty of fans and critics counted them out, the band is now celebrating its 30th anniversary (breakup be damned). For such a milestone, we recently sat down with frontman David Lowery for an exhilarating six hours.

During the course of that master class on all things Camper, Lowery discussed the ins and outs of each album’s recording sessions, the band’s personal and political views, their slew of influences, who guided their career (SPOILER: it wasn’t really them), breaking up, getting back together, working with a major label, moving within the music industry itself, and even a history lesson or two. As a reflection of his band, Lowery is poignant and well-spoken, profoundly aware of his group’s oddball approach to music and fiercely proud of their persistent curiosity.

To Camper Van Beethoven: here’s to a wild and wonderful 30 years. We couldn’t have written it any better ourselves.