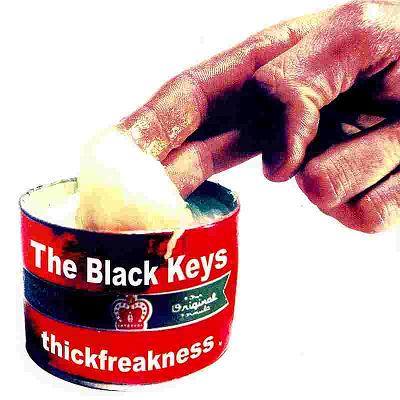 If you’re out to solicit a cheeky grin from The Black Keys’ singer/guitarist Dan Auerbach, Bieber-bashing percussionist Patrick Carney, or just about anyone with a music pulse from Akron, OH, try mentioning the 55th Grammy Awards. Though the 2013 Grammys coincided precisely with the first day of the Chinese Zodiac year of the Black Snake, we may as well dub it the year of The Black Keys after the whipping those Akron boys gave fellow nominees Bruce Springsteen, Jack White, and the rest of the field.

Matching her jet-black bangs with a sequined black dress, an effervescent Pauley Perrette hooks her right arm around Dave Grohl’s left elbow and flashes a 1,000 kilowatt smile. Grohl, dressed like a stylish undertaker in a silk black shirt, black suit jacket, and skinny black tie, stands rigid, lips press together, hands interlocked in front of his genitals to conceal a thin black envelope.  As Grohl reads the nominees for Best Rock Performance, the camera focuses in on Auerbach and Carney, garbed in matching black leather jackets and dark trousers, slouching in their cushioned seats and trying without success to suppress gratified smirks.

After a nine second pause during which idle chitchat ceases abruptly, Grohl tears open the envelope and cracks a wide grin.  In a low register monotone, the rock icon matter-of-factly declares, “Lonely Boy – Black Keys”, as a bubbly Perrette echoes these last two words alongside hearty applause. Leaping out of their seats, The Black Keys trot quickly onto the stage, embrace a vermillion-faced Grohl, and dish out a humble, endearing 25-second acceptance speech.

As if snagging the triple crown of Best Rock Song (“Lonely Boy”), Rock Album (“El Camino”), and Rock Performance (“Lonely Boy”) wasn’t enough, Auerbach also took home a Grammy for his production work on El Camino, Dr. John’s Locked Down, and Hacienda’s Shakedown. But just as Rome sure as hell wasn’t built in a day, The Black Keys didn’t spring up to sweep the Grammys overnight. The two-piece band’s journey to commercial and critical superstardom stretches back into the early years of last decade, including a plethora of breakthroughs and milestones along the way.

No disrespect to bluesy garage rock debut The Big Come Up, but sophomore LP Thickfreakness, which celebrated its tenth anniversary last month, is where The Black Keys first fully harnessed the subversive, raucous verve that underpins their most liberated and puissant cuts. Raw, densely textured, and tightly configured to fundamental blues paradigms, Thickfreakness revives Delta Blues with a scabrous laxity that‘s rooted not in the cotton fields of the South but in the decrepit unmanned factories of the deindustrialized Midwest. Though the band indisputably tweaked and modified their sound over the years this recalcitrant rejection of rustbelt paralysis serves as the backbone for their subsequent five offering, from their 2004 follow-up Rubbery Factory to 2010’s platinum polished Brothers and 2011’s Grammy-adorned, El Camino.

Building upon but never merely appropriating the discontent of 20th century Delta Blues, Thickfreakness applies traditional blues reflexes to the modern day daemons of social alienation, vocational mediocrity, and the urban grind. On “Hard Row” (“You hit the city, it swallow you whole / Y’got no friends darlin’, t’satisfy your soul”) and “No Trust” (“Oh, she hates your job and what you want him to do”), Auerbach comes right out and screams it. Atop grating, scathing guitar lines and Carney’s rambunctious drum fills, Auerbach delivers a roughshod vocal that seeks a cathartic release from the stifling, soul crushing landscape in which we finds ourselves.

Though it’s hardly the first ditty to promise redemptive exodus to a disaffected lover clinging to a destructive romance, “Set You Free” is imbibed with a vigorous pizzazz that easily justifies revisiting this timeworn theme. Kicking off with 16 crisp, rapid snare drum smacks that hit the ear like an AK-47, Carney immediately establishes that defeatism and surrender have no place in The Black Keys’ world. Before we can catch our breath, Auerbach cuts off the final rhythmic slap with a mettlesome, igneous electric guitar. Not to be outmanned, Carney takes full advantage of every break in the action by filling each brusque respite with as many tom-tom and snare drum bursts as is humanly possible. Simultaneously begging and commanding the girl to ditch the schmuck whose causing all this heartache, Auerbach belts in a coarse and gravely tone, “Let ‘em go, walk out ya’ door / An’ come ta me / I gonna’ set you free / Ahhhh set you freeheee!” repeating the last line until his voice is subsumed by 16 fresh cracks of Carney’s snare drum. Transitioning smoothly to “Midnight In Her Eyes”, Auerbach once again plays confidant and counselor to a girl whose “manic ways” have gotten the best of her.

Even when venturing into the precarious morass of old blues covers, The Black Keys manage to infuse these tracks with their own frenetic intensity. Take Richard Barry’s “Have Love, Will Travel”. Barry’s version, conveying hopeful optimism through a schmaltzy call-and-response section and indolently bobbing standup bass, leaves no doubt that fate will eventually lead the singer to his dream girl. But rather than leaving it all up to fate, The Black Keys take matters into their own hands. Their version comes off less like an appeal to destiny and more like a Craigslist post: “If you need lovin’, oh baby I travel / I travel from Maine down to Mexico.” Instead of just hoping and praying for warmth and affection, The Black Keys brashly dare these ladies to try and resist their brash, visceral masculinity. And in case you had any doubt, a cocksure Auerbach boasts that rejection ain’t no skin off his back, “No matter where I’ll be / I’ll find that girl and she’ll sat-is-fy meee!”

Just how The Black Keys achieved this deliciously unencumbered ferocity on Thickfreakness is really no mystery. The LP was primarily recorded in 14 hours on an early 80’s Tascam 388 eight-track down in Carney’s basement. But what’s remarkable is how tight and focused it sounds given this expedited timeline. Barreling through the recording processes is a risky prospect for a young band, and, more often than not, the result is sloppy, bumbled, and directionless. Yet from Aurbach’s very first distorted, bent riffs on the album’s title cut, The Black Keys handily rebuff off this stereotype while finding a voice that is distinctly their own. Give any of the band’s subsequent records a spin. Alongside the ghosts of Son House and Muddy Waters, you’ll hear the assiduous, frenzied energies that The Black Keys exhumed in Carney’s cellar during the Thickfreakness sessions.