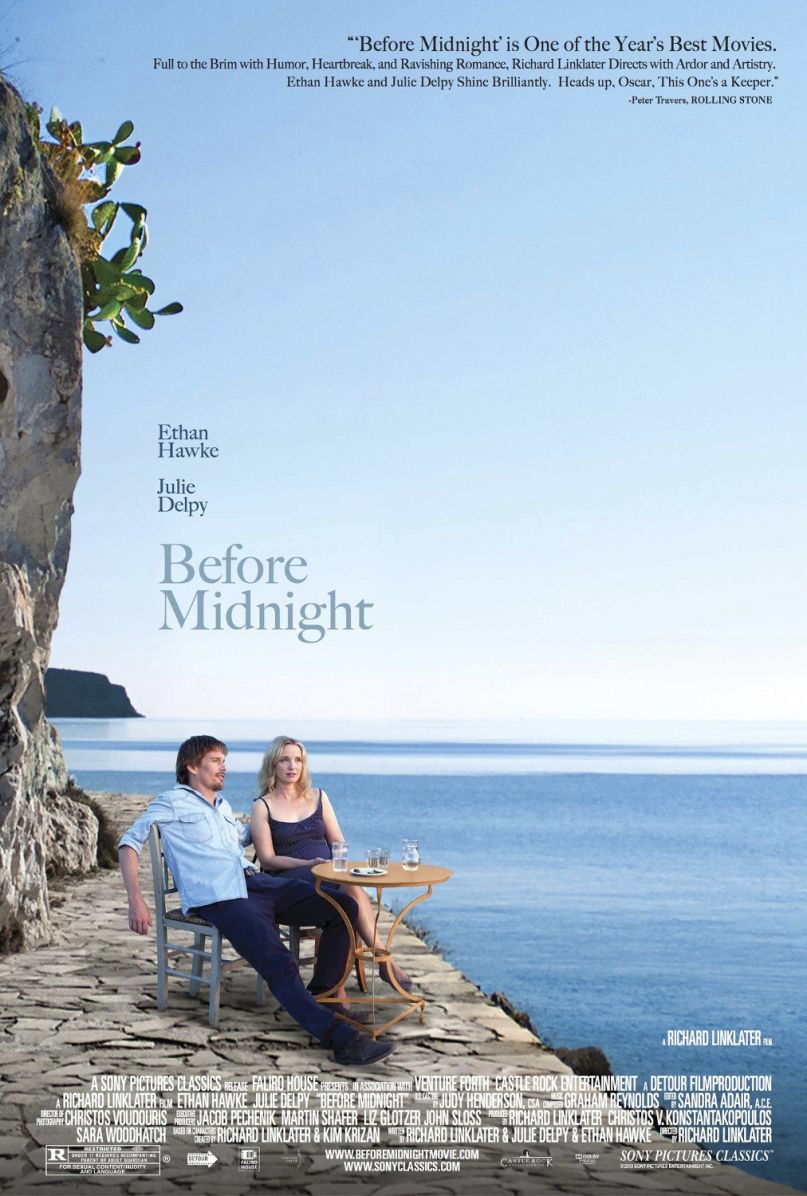 When traveling hearts Jesse (Ethan Hawke) and Celine (Julie Delpy) promised in Vienna to meet up again at the end of Richard Linklater’s 1995 cult hit Before Sunrise, there wasn’t any conclusive evidence about whether that’d actually come to fruition. So, for nine years, critics, scholars, fans and young romantics speculated over their reunion, a question the director shied away from ad infinitum. That is, until 2004’s spectacular followup Before Sunset, a unique improvement over its predecessor that answered many questions and left one to nag: Would they finally get together now, after all this? Another nine years later, that tension evaporates seconds into Before Midnight, the latest installment in Linklater’s now-diamond trilogy.

The answer: Jesse never made his flight and, instead, ignited his long-sought-after relationship with Celine, bringing him two daughters and a European romance for the history books. Well, sort of. In the first 20 minutes of Midnight, we discover things aren’t so poetic in the lives of our two favorite Europeans, even despite a once-in-a-lifetime Greek getaway; Jesse is grappling with issues of being an overseas father to his now-teenage son from his previous marriage, while Celine struggles with chasing her own dreams in spite of her full-time job as a mother. It’s a brilliant catch-up to these two, captured in one long take, a series trademark that’s just as inviting as seeing these characters together onscreen.

What’s mystifying about Midnight is how Linklater, Hawke and Delpy continue to sell these characters. Since Jesse and Celine first stepped off the train in 1995, they’ve shared their weaknesses and strengths through dialogue and genuine affection, making us believers of and subscribers to their every word. This explains how gorgeous slices of Europe continue playing second fiddle to Hawke’s numerous hairstyles and Delpy’s rambling existential crises. Yet now that the pining is over and the two are together, we’re at the ugliest part of any relationship: the reality.

That reality sets in fast on Midnight, which similarly to Sunrise and Sunset(sing it with me now) doesn’t let up on the ingenuous details. Earlier in, there’s an in-depth discussion about the fantasy of eternal love that foreshadows a heated debate in the tragic second half. (Warning: Any couple that’s been together for more than six months might experience flashbacks.) It’s real, it’s gruesome, it’s wildly entertaining. After all, emotions are wired to each character. And true to their respective natures, Hawke’s witty diatribes and Delpy’s triggered responses tug at the heart just enough to keep us from closing our eyes.

It’s not all tissues and tears, however, and there intermittent rays of sunshine (both figuratively and literally) that steer this away from Mamet territory. Their situation is much different, but both of their personalities remain intact, which is what makes Linklater’s experimental storyline so unique and believable. This doesn’t feel like a sequel, and arguably it isn’t. It’s another section of one of the most organic storylines the silver screen has ever shared. It’s so unnerving how realistically Hawke and Delpy exist together that I’d be intrigued to hear how their real-life partners react to these films.

All of Midnight’s success circles back to Linklater. Since his humble beginnings, the Texas filmmaker has dedicated himself to an assortment of projects that have reduced the expectations and confines of cinema to brittle little pieces. Slacker reignited rugged independent cinema, Dazed and Confused did retro fetishism right and Waking Life reintroduced philosophy. With this series, Linklater’s uncorked a one-of-a-kind bottle of wine that only peaks with age and never stops pouring. It’s every writer’s wet dream: A tale that won’t stop giving. The problem is that most scribes never have the tact or chance to tell the story right.

Three films and 18 years later, Linklater proves an ace in that field, reteaming with his writing partners to perfectly capture the next integral chapter of this couple’s life. And like an intimate conversation with a close friend of years past, it only gets more intriguing as the years pile on. Here’s hoping we see themBefore Dawn, Before Dusk, Before Death.