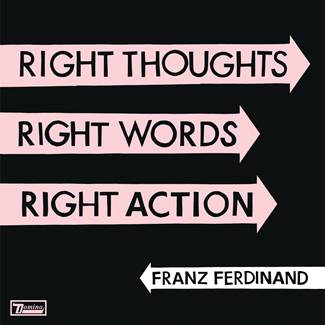 Franz Ferdinand will soon return with Right Thoughts, Right Words, Right Actions, due out August 27th via Domino Records. Its the bands fourth album to date and their first since 2009’s Tonight.

The album’s ten songs were recorded over the last year in a number of different studios throughout the UK, Scotland, Sweden, and Norway. When asked for a quote by Domino, frontman Alex Kapranos came back with: The Intellect Vs. The Soul, played out by some dumb band.”

The band has already debuted eight of the album tracks in concert, which we’ve compiled for you below. Update: As it turns out, the band has also performed “Treason! Animals.” and “Love Illumination”, though under different titles. So, yes, you can actually watch Franz Ferdinand perform their album in full right now:

“Stand on the Horizon”:

The album will be available in a variety of formats, including a double CD and double LP with bonus disc featuring a live session from Konk Studios in London. Also available is a limited edition Passport Edition, containing a deluxe version of each physical format of the album, all 7s and 12 singles, access to high-quality audio files, as well as exclusive tracks and content. Pre-orders are ongoing.