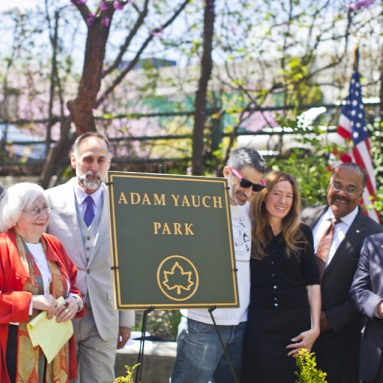 This morning, Brooklyn’s Palmetto Playground was rechristened to Adam Yauch Park, after the Beastie Boys member who died of throat cancer one year ago tomorrow. In attendance were Adam “Ad Rock” Horovitz, Yauch’s mother, Beastie Boys manager John Silva, Brooklyn President Marty Markowitz, and several other city officials. Dale W. Eisinger was there to capture the ceremony — his photos are below.

Tomorrow marks the second annual MCA Day, which will take place at Brooklyns Littlefield on Saturday. Rare photographs and fan art will be on display as members of the Dynamic Rockers and other DJs spin Beastie Boys records.

Update: Watch video of Ad-Rock’s speech from the ceremony at the bottom of the page.

All photos by Dale W. Eisinger