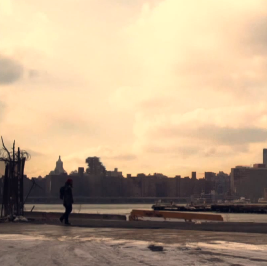 Rising Brooklyn rapper Joey Bada$$ may already have his sights set on the Summer Knights mixtape, but he did take time recently to shoot a video for “Like Water”, off last year’s Pro Era’s PEEP: The aPROcalypse mixtape. Directed by Jonah Schwartz, the clip is one long, moving tribute to the late Capital Steez, whose verse in the song is represented as spinning vinyl. The rest of the group perform in various Brooklyn locales while a graffiti artist paints a massive Steez mural on a rooftop. Watch it below (via Rap Dose).

“Capitalizing the name ‘Capital STEEZ’ is now as good as remembering any credible historic leader leading a militant army of troops,” the collective wrote. “‘Like Water’ is the visual stepping stone to what STEEZ lead for the listeners of revolutionary music.”

Bada$$’s Summer Knights mixtape is due out June 12th. Check out the lead single, “Word Is Bond”.