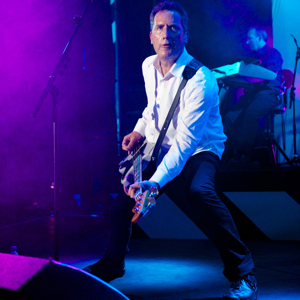 As London venues go, The Roundhouse is pretty iconic. Once a Victorian repair shed for steam engines, this elegant industrial building now functions as a thriving multimedia arts venue and provides a dramatic space for live music, with a 3,000 plus capacity. The elaborate metalwork that shoulders the building creates a decorative and apt frame for Orchestral Manoeuvres in the Dark (OMD)’s Friday night performance. The circular ground floor was a sea of bobbing bodies while less energetic souls were steeped along the balcony that extends out from both ends of the stage along the auditorium perimeter.

Opening with Please Remain Seated, the intro piece from its new album English Electric, OMD scarcely phased the largely standing crowd such was the buzz of anticipation in the humid air. Amid a sea of coloured lights battling the ubiquitous smoke machine, the band launched into the melodic strains of Metroland. Flanked by the dark suited Paul Humphreys and Martin Cooper on twin Rolands and drummer Malcolm Holmes astride a monster kit, Andy McCluskey dressed in a loose white shirt and black jeans orchestrated the crowd with lavish arm gestures from the off. His band mates blended into the stage backdrop, the keyboardists in particular acting as restrained foils to McCluskeys verve.

Back together with its original line-up, OMD breezed through a selection of old and new songs, making the audience feel both comforted and challenged, with regular pleas for participation from McCluskey. Alternating as the bass-playing singer with his white Fender strapped low, or unfettered, as the galloping front man teaching old dogs old tricks on the dance floor, McCluskey fed off the audiences goodwill and repaid it in spades with a performance that placed him as a natural live entertainer. His voice was rich and seasoned; his range and tone powerful from start to finish. Despite the natural suspicion that much is programmed, there was a real sense of a live band at work. The punching rhythm section had much to do with this while the twin keyboards added lush layers and catchy sequences.

While it was obvious that the crowd appreciated the oldies, with the back end segment of Sister Mary Says through to the inevitable Enola Gay drawing an increasingly fervent response, the new material stood up very well by comparison. Along with the pulsing Metroland, the stabbing rhythms and percussive power of Our System stood out. Contrasting the purity of space exploration with human failings, the song was delivered with a passion by McCluskey that spoke of higher ideals than dance exhibitions. For me, though, the best of the evening bridged the years; the ultra melodic Kissing The Machine – a 1993 collaboration by McCluskey and former Kraftwerker, Karl Bartos, fully updated by Humphreys on the new album – delighted aurally and visually as a cascade of descending figures played on the stage backdrop. From the back catalogue, putting Joan Of Arc and Maid of Orleans together was a stroke of the sublime.

While Paul Humphreys relieved McCluskey on vocal duties for old favourites, Souvenir and Forever (Live and Die), his co-founder was the undoubted star. The perfect front man throughout the set, McCluskey forged a real bond with an audience that did exactly what was asked of them, from clapping en masse, and in time, to dancing their socks off. There was no embarrassment here for fifty(or even sixty)somethings, as McCluskey gave a masterclass in dad dancing. Those whove had their fill of Psy should check this guy out. Those who havent, of course, should see their analyst. OMD rounded off the night full circle with their first single, Electricity, with McCluskey drawing back the years: “We don’t know when we’ll see you again, but we end where we began at 16.” After this show chances are it may not be another 37 years.