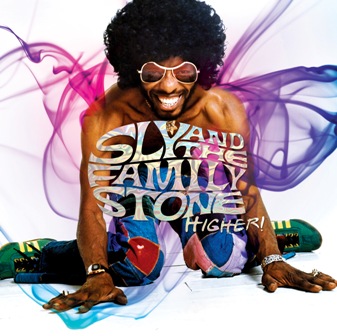 Earlier this year, funk overlord Sly Stone (figurehead of the iconic Sly and the Family Stone) turned 70. In celebration of the milestone and all his groov-e-tational work over the years, Epic/Legacy is releasing a career-spanning four-CD box set entitled Higher! on August 27th.

The first such anthology in Stone’s 61-year (!) career, the set features 77 tracks, 17 of which are previously unreleased. Highlighting the tracklist are mono versions of songs selected from Stone’s expansive catalog (centered mostly around the Family’s activity from 1968-1975), including hits like “Everyday People”, “Stand!”, “I Want To Take You Higher”, “Hot Fun In the Summertime”, and over 30 more.

Also featured are seven pre-Epic Records tracks, including the highly-bootlegged cover of Otis Redding’s “I Can’t Turn You Loose”, from Stone’s time as an A&R-producer for Autumn Records. The collection is rounded out with rare demos, instrumental tracks, and television and live recordings, including cuts from Stone’s August 1970 gig at the Isle of Wight Festival.

Oh, but wait, there’s more: the set is accompanied by a 104-page booklet, comprised of a liner notes essay, an illustrated timeline of Stone’s career, track-by-track annotations, rare and uncirculated photography, 45 rpm label and picture sleeve reproductions, vintage concert posters and ticket stubs, and much more. Much of the writing was handled by Jeff Kaliss, author of the authorized biography I Want To Take You Higher: The Life And Times Of Sly & The Family Stone.

“Refracted in these treasures,” Kaliss wrote of Higher!, “are colors you may be unused to seeing in Sly: old R&B, jazz, nursery rhymes, gospel, and even country, fused and transformed by a precious visionary and his fellow musical alchemists.”

Check out the entire tracklist below, followed by a few gems from Stone’s discography.