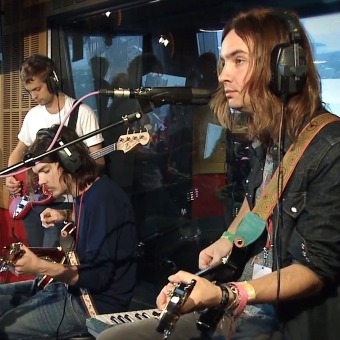 Earlier this year, Outkast had themselves a sorta kinda but not really reunion, and while it didn’t go beyond that sole Frank Ocean track, it clearly re-sparked people’s interest in the ATLiens. STS9 put their jam band spin on “SpottieOttieDopaliscious”, Ryan Hemsworth chopped and screwed “Return of the G”, and now Tame Impala have returned home to Australia to cover “Prototype” for Triple J’s coveted “Like A Version.”

Apparently one of their “favorite songs ever,” the band take the Speakerboxxx/The Love Below deep cut from a funky slow-burner into something a little more psychedelic. While that sweet, wubby bass groove remains intact, there’s loads of reverb and frontman Kevin Parker’s vocals are more boyish and charming than outright nasty. If you could get Big Boi and Andre 3000 in the same room, I’m sure they’d dig it, too. Watch the replay below.

Your favorite band of 2012 is still touring in support of Lonerism. Check out their full schedule here.