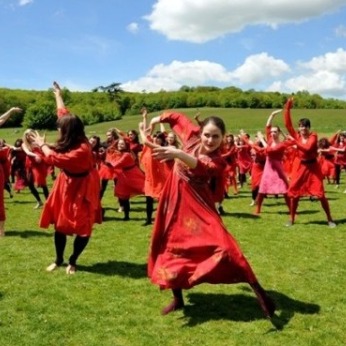 For those not yet ready to get a tattoo honoring their favorite artist, why not take the approach of UK performance group Shambush. Recently, the group paid homage to the incomparable Kate Bush by gathering 300 look-alikes to re-enact her “Wuthering Heights” video in a city park. It’s a chance to meet fellow fans, plus no bleeding nipples!

As part of last Saturday’s Brighton Festival Fringe, 300 women and men (that’s right, dudes) descended upon Brighton’s Stanmer Park decked out in red dresses, long black wigs, and shimmery lipstick to break a world record. (Obviously either for “Most Obsessive Kate Bush Fans” or “Best Use of a Saturday Morning”). But while it didn’t appear that folks from the Guinness books were on hand, the sight of hundreds of people shimmering like leaves in the wind all in the name of Kate Bush deserves every medal and honor the world can afford. Watch a short replay below.

And had it not been for his recent foot injury, we’re pretty sure even Big Boi himself would’ve been there as dancer #301.

Photos courtesy of The Argus.