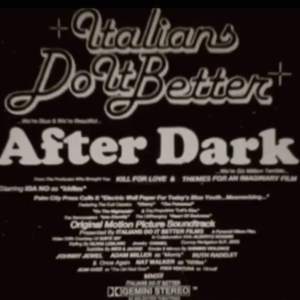 In their latest set of dusty visuals, Italians Do It Better outfit Glass Candy take us into the studio as they record their After Dark II track, “Beautiful Object”. Directed by Martin D’Argensio and edited together by Alberto Rossini, the footage comes straight from a documentary that D’Argensio is piecing together, according to the label’s official site. Catch it below for a strange trip to 1977 — bring plenty of leather.

Earlier this month, Italians Do It Better finally released the 15-track follow-up to After Dark, featuring new music from Chromatics, Glass Candy, Desire, and a variety of other Johnny Jewel-related projects. Grab it via iTunes.