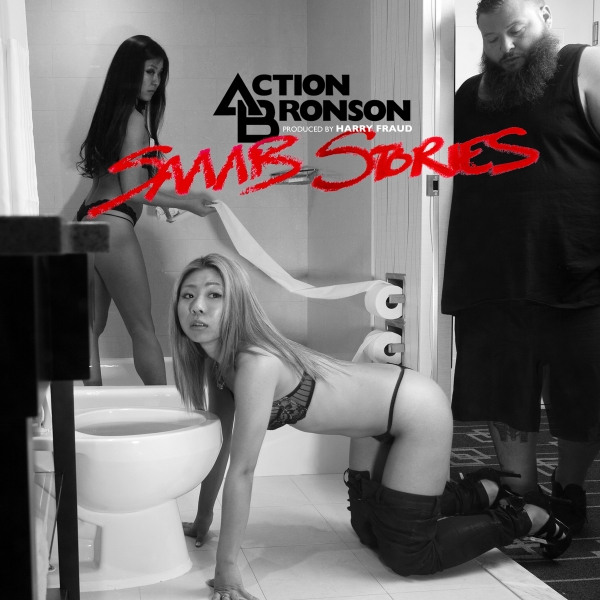 The EP is not a format that’s utilized a lot in modern rap music, with mixtapes and Soundcloud releases instead serving as the preferred stopgap for hip-hop majordomos. This makes sense; it’s costly enough to put out LPs, given the dwindling profit margins for label-backed releases. Putting out another such release — one that’s shorter and less likely to narrow that monetary gap — doesn’t seem like the savviest business strategy.

To which Action Bronson would likely reply, “Who the fuck cares?” Bronson, born Arian Asllani, isn’t the type to give much thought to anything more subtle than SAAAB Stories’ album cover, at least not on record. If he were to be confronted with the above hesitance regarding EPs, his preferred reply would likely be some form of euphemism involving either pussy or food. Pussy and food, in fact, is the filter through which Bronson views almost everything. Just check his Twitter feed.

That’s much of Bronson’s charm. Every track on his Blue Chips mixtape bubbled with joyous irreverence, evidence of an oversized personality finally finding a big enough home. That charm is still evident on SAAAB Stories, but the problem with this 25 minute release is that the home isn’t big enough. There doesn’t seem to be enough of the former chef’s dexterous and clever vocal work to justify this release. Often, SAAAB Stories sounds like an Action Bronson release exactly the same way a film “produced by Quentin Tarantino” sounds like Pulp Fiction.

Which isn’t to say that SAAAB stories is a poor record. It’s not to say it’s a perfunctory record, that’s not quite right either. There’s certainly effort, and definitely quality, especially given the variety and intricacy producer Harry Fraud injects into these seven tracks. Fraud, in fact, is the star here. No two tracks on SAAAB sound alike, but it isn’t eclectic or scattered. Opener “2 Virgins” traffics in some faded, kite-high Carlos Santana psychedelia and bongos; lead single “Strictly 4 My Jeeps” sounds like trash alley scuz; “Triple Backflip”, “The Rockers”, are weed-rap opulence; “No Time” and “Seven Series Triplets” are exemplary examples of classic ’90s East Coast rap — the latter even features Prodigy and Raekwon.

But this focus on Fraud is actually to the detriment of the record. Bronson has made a point of working entire releases with single producers, creating a symbiotic relationship with the music of his producers. On Blue Chips, with Party Supplies, Bronson turned in a jubilant off-the-cuff performance that at once fit and was inspired by Party Supplies’ YouTube-trawling beats. With Fraud’s more considered, more arranged beats, Bronson sounds a bit fenced in, including the awkwardly delivered line, “Come/ Hold my dick while I take a piss/ Put it back in my boxer shorts” from “Triple Backflip”.

The album ends up being weakest on the tracks where Bronson is sharing time. “2 Virgins” is hamstrung by Big Body Bes’ quizzical boasting, where the frequent Bronson guest actually implies that he has gone “quadruple platinum.” Closer “Seven Series Triplets” is dominated by its rap legends. “The Rockers” actually features Wiz Khalifa. But when Bronson gets space to himself, he delivers the record’s best tracks. “No Time” is Bronson flipping the Nas and Ghost comparisons, crafting a NYC rap classic that allows him into that conversation as an equal. His “No Time” joint is all details: both “longer than Mutumbo’s finger” and “rolled like a croissant/ mad butter.” And “Strictly 4 My Jeeps” is the EP’s finest moment, where Bronson steps his pace up faster than anything he messed with on Blue Chips and ends up demolishing vaginas, listening to Coldplay, and overdriving a Porsche.

But there aren’t enough of those moments. With such a limited amount of time to work with on SAAAB Stories, it’s a disappointment that Bronson chose to cede time to a cast that, with the exception of Prodigy and Raekwon, doesn’t live up to Bronsolinio. Instead, we get a Harry Fraud production showcase, with limited Action highlights — a moderately enjoyable listen that’s nasty, but unsatisfying.