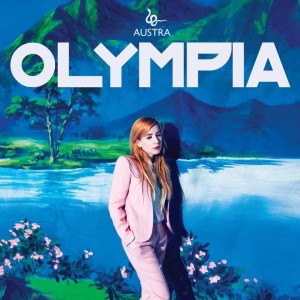 Toronto electroni-pop act Austra has seen some significant changes since their 2011 release of Feel It Break, namely making the transition from trio to collaborative sextet, but more recently, making their way all the way to the dance floor with their new LP, Olympia. Rather than sitting on the sidelines in the shimmering darkness of their first full-length, Austra break through the fifth dimension to otherworldly realms with 12 multi-faceted tracks that are fused together with Chicago house and their accessible dance-pop hooks. Don’t let that alarm you though — artful variations on two or three distinct themes prevent things from getting repetitive or too detached.

Album single “Home” and “Annie (Oh Muse, You)” channel sunset cocaine cruises on the set of Miami Vice, combined with the Risky Business soundtrack and some of those other twitchy, vibra-toned opening themes found on gripping crime TV dramas of the ’80s. Besides drawing from a deep pool of synthesizers like the rest of Olympia, subtle flourishes from flutes, marimbas, timbales, and other world and orchestral instruments add an entirely different coloring to much of the album — one that’s warmer, possibly tropical, and probably found in the jungle. Album standout “We Become”, wields clanging metal cans, spoons, and glass jars to create a wildly kinky, almost-Caribbean groove while the ladies of Austra coo, “It could be our love / It could be better”, in a hook as potent as anything on Lionel Richie’s Can’t Slow Down.

But just like Mr. Casanova’s career, Olympia isn’t contained to just one hemisphere, frequently leaving the tropic-tinged numbers to skirt around the glimmering ice castle that Austra sometimes resides in, among other locales that only exist in the nebulous realm of unearthly enchantment that is Olympia. Tracks like “Fire” and “Sleep” serve to connect the dots between all of the domains — including the same driving House beats, synth blanketing, and other percussive elements that sweep through the album — while also incorporating cathedral-esque smatterings and Medieval chord changes that add yet another facet to Olympia’s colorful palette of sound. “Fire” in particular bridges outer space, the jungle, the beach, the freeway, an arctic cave, and Zelda’s Water Temple with its shifting tempos and moods, while “Sleep” could be a mechanical backing track for Rumplestiltzkin as he spins straw into gold.

Or rather, Austra performs the real magic, frequently making something out of nothing with the sparse instrumentation and minimalist piano/vocal-only intros that characterize selections like “Reconcile”, “I Don’t Care (I’m a Man)”, and “You Changed My Life”. Most of the album consists of merely three or four song parts that naturally cascade into opulent kingdoms of sound to surround Stelmanis’ vocals. This is a pivotal aspect of Austra’s newer material, revealing their ability to dismantle or create a song from only the most vital components while still perpetuating their rich, reverberant sound. Equally as striking is how each track manages to remain uncluttered — cognizant of its direction and identity from start to finish. Perhaps this is Stelmanis’ classical training manifesting itself, but when she unfreezes then unleashes her chilling tenor into the thick of Austra’s dense harmonies and big, beautiful melodies, there is a cohesion and purpose that drives each song forward as much as the crashing drums and House beats.

Album closer “Hurt Me Now” achieves this using the same approach, gradually adding an layer of spritely voices here and a swell or a drone there, while Stelmanis’ Gregorian delivery leads the way to a gorgeous bridge that could have only been inspired by scenes of Liv Tyler and Cate Blanchett in Lord of The Rings. There might even be a line spoken in Elvish. Regardless of those particular lyrics — smothered underneath the waves of reverb — Olympia’s aura pervades the listening sphere Austra has fabricated for their second LP, transcending the frozen cave of their first to the upper echelons of atmospheric dance-pop.