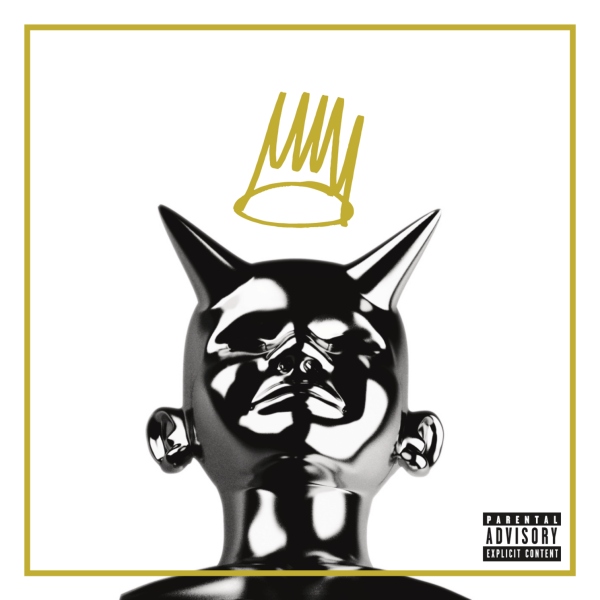 We’re in the Garden of Eden with J. Cole. The young rapper’s second LP Born Sinner references the original sin myth simply with its title. On the late-album track “Forbidden Fruit” he opens: “Me and my bitch/ took a little trip/ down to the garden/ took a little dip/ apple juice falling from her lips/ took a little sip.” Allusions to apples are all across the 16 self-produced tracks, along with glimpses of snakes, countless temptations, and the feeling that Cole knows too much for his own good. In this paradise he paints for us, Cole isn’t Adam. He isn’t Eve. Even as he warns of slithering predators in “LAnd of the Snakes”, on Born SinnerCole is the serpent that lets us see the cost of having it all.

Because even as he watches his career progress, Roc Nation’s inaugural signee lives to prove his cunning. Fiercely aware of his environment, he pressed the release of this album a week to coincide directly with Kanye West’s Yeezus, wanting to go toe-to-toe with one of the greats. “When I say that I’m the greatest I ain’t talking about later/ I’mma drop the album the same day as Kanye/ Just to show the boys the man now like Wanyá,” he continues on “Forbidden Fruit.” Cole professes to be a student of Machiavelli on opening track “Villuminati”; we can take each step of this album cycle as marketing mercenary, even if it took two drawn-out years between this and Cole’s debut.

He does display a Machiavellian egocentrism across the release. Though the album features a number of guest spots, including James Fauntleroy, TLC, Miguel, and Amber Coffman, “Forbidden Fruit” is the only track that gives a spot to a fellow rapper. Here, it’s Cole’s friend Kendrick Lamar, who delivers not a verse but the icy hook. Cole jumps on top for good measure. It’s all about him. Add to the mix his insistence to produce the tracks and one starts to wonder if he’s overextended himself. Cole is a whiplash-quick rapper, occasionally so clever you’re doing double-takes to his quips. But by the time “Crooked Smile” comes around, it sounds almost like an afterthought.

Cole envisions himself in a broader context, a “Martin Luther in the club.” He reaches for statements of love, death, and materialism—everything that’s simply passing. His heart is definitely there on tracks like “Trouble” and “Chaining Day”. But he sounds most bare, wounded on “Let Nas Down”, a track about finding out one of his heroes detested his early work. It gives Cole, up to this point a Career Average Joe, another opportunity to humble himself: “Long live the idols/ may they never be your rivals.” But later he adds, “This is for the nigga that said that hip-hop was dead/ I went to Hell to resurrect it/ how could you fail to respect it?”

So yes, Cole is conflicted. He reveres his idols but wants to be alongside them. Elsewhere, he prays to god but names the clip of televangelist Pastor Kerney Thomas a “skit.” He tries to prove you’re homophobic with an anal sex joke. He doesn’t know whether to settle down or to keep fucking around. He feels awkward around his boss’s wife talking about expensive cars. Even so, he’s got wealth now but doesn’t know how to handle it, and in a way, despises it. But that’s all in passing, right? Is love even real? What’s all this worth? Is success worth holding onto? Can you run away from everything you’ve built? Do you eat the apple or don’t you? “Damned if I do, damned if I don’t.”