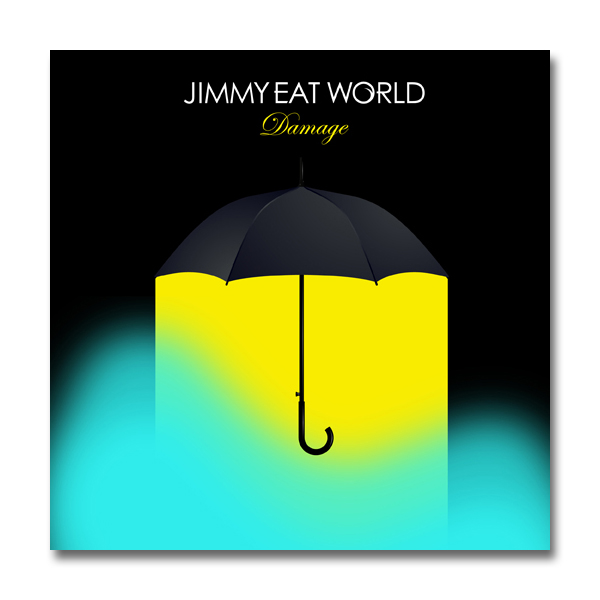 Few genres can bring a party down like emo, but Jimmy Eat World have done a pretty good job of sidestepping much of the woe-is-me bullshit that hovers over the genre like a gray cloud.

Of course, the band has always been something of an odd fit for the emo tag, which by 2013 has been sufficiently watered down to categorize any band brazen enough to bare real emotion on record. Even if they practically wrote the code for the alternative subgenre with their 1999 masterstroke Clarity, the Mesa, AZ band has long since risen above and stretched beyond emo’s marginal confines. While scores of bands have taken confessional undertone to its comically weepy extremes, Jimmy Eat World has always managed to be open without triggering listeners’ gag reflex. Twenty years later, they’re still one of a handful of bands that give the genre some clout.

That refined approach to sincere power pop is on full display on Damage, which finds Jimmy Eat World once again shouldering the burden of the sensitive everyman with a level, thoughtful head. Call it what you want, be it emo, power pop, or alternative, but mindless labeling has never really done the band justice. Now seven albums into their fruitful career, it’s probably just easier to call Damage what it is: a Jimmy Eat World record, one that once again hits the fine balance between driving guitar rock (“How’d You Have Me”), delicate and textured ballads (“Damage”, “Book of Love”), and an emotional trail mix of both (“Lean”, “Bye Bye Love”), all accented by frontman Jim Adkins’ wobbly falsetto.

The band’s musical hallmarks are very much intact, but we’re not looking at a Bleed American carbon copy. Instead, Damage updates the Jimmy Eat World patent for something more befitting a group of dudes edging their way toward middle age. Adkins has described the album as “an adult breakup record,” and that approach marks the wide swath of the album’s 10 tracks. They’re no strangers to mining themes of hurt, confusion, and alienation in search of musical fodder, but they’re used to tackling such sour subjects from a younger vantage point (a la “The Middle”). On Damage, they create enough emotional distance to look at heartbreak introspectively and with the benefit of hindsight.

Adkins wastes little time getting reflective on album opener “Appreciation”, the protagonist recognizing the error of his ways over top of the band’s classic pairing of big drums and melodic guitars (“Thank you honey for reminding me/ How long you can stare at someone and never see”). The rest of the record is similarly checkered with feelings of missed opportunity and lingering regret, from the made-for-radio single “I Will Steal You Back” to other tracks that stand up as some of the most pop-oriented offerings in the band’s lengthy career (“Please Say No”, “No, Never”). As such, Damage is admittedly a lot of the old sprinkled with a little bit of new, resulting in an album that’s comfortably settled in the band’s sonic safe place without stagnantly spinning its alt-pop wheels.

In their quest to update the breakup record for those a bit too old to mope and stew in their juices, Jimmy Eat World succeeds here for the most part. Society might expect those broaching 40 to have their shit more or less figured out, but Damage proves you’re never too old to reevaluate and take stock of the past. A record defined by loss but approached with a collected mind? How very adult indeed.

Essential Tracks: “Appreciation”, “I Will Steal Your Heart”, and “No, Never”