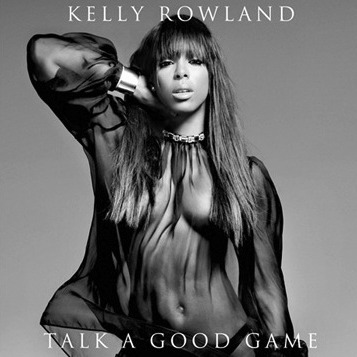 Follow me here: Kelly Rowland and Beyoncé are, respectively, the girl group Lennon-McCartney (with Michelle Williams basically the Ringo). By that I mean, regardless of songwriting or who was really the star, their dynamic was special and profound. But while Queen B is coming off her Band on the Run ish, Rowland’s latest, Talk a Good Game, is basically Lennon’s Some Time in New York City. Though, where Lennon’s “dud” was overly political, Rowland half-heartedly vamps it up with several befuddling missteps.

“Freak” is sexual solely for the scintillating electro beat, which Rowland tarnishes with passion-less lines like “You perform/ I cheer/ You scream/ No one hears.” And The-Dream-aided “Sky Walker”, which tantalizes with synth-pop and Chinese strings, lacks dynamic interplay between the pair; it’s only salvaged because of Dream’s excessive machismo. Other sexually-charged numbers (the cheap Weeknd knock-off “Red Wine”, the demoralizing “Put Your Name On It”) feel inorganic and contrived.

Still, the heavy pursuit of sexuality makes sense: Rowland is just trying to distance herself from the clean-cut Destiny’s Child (and yet somehow still profit from the “reunion” track “You Changed”). But where her sexuality failed, the confrontational “Dirty Laundry” dazzles. It’s a slightly more polished (and less hyperbolic) chapter of R. Kelly’s Trapped in the Closet: it feels disjointed and over-stuffed, but she just goes off about the group’s end, her own insecurities, and living in Bey’s shadow. It’s so raw and visceral that we finely see her as intended: vulnerable, flawed, and totally real.

She tries replicating that authenticity, but there’s only the uber-cliché “I don’t care; we’re over” anthem “Gone” and the album’s superficially enjoyable title track, which Rowland approaches with some intriguing level of nuance.

Even after Some Time, Lennon remained an icon in the pop music mythos. While Rowland might not ever be as legendary, this LP demonstrates that she can be something profound if she confronts her issues. So, Kelly, to paraphrase Lennon, you can’t believe in Destiny’s, you must believe in you.