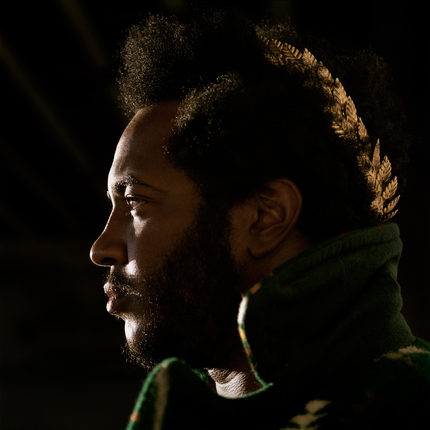 Flying Lotus and Thundercat have been highlighted as the dynamic duo of Los Angeles indie electronic label Brainfeeder Records. Their first collaborations, on 2010’s Cosmogramma and 2011’s The Golden Age of the Apocalypse, enthused audiences with distinct flavors in every track, as Lotus experimented with complex drum flair and synth warps, and Thundercat’s slick bass licks challenged the pace of the metronome. As they saddle up for round two, they’ve gradually broken down those distinctions and found sweet harmony within a simultaneous understanding of free jazz, a cosmic playground that “makes [each instrument] into its own locomotive.” Bass virtuoso and leader of Thundercat Steve Bruner successfully carves this distinction into his sophomore album, Apocalypse, a sonic wonderland fueled by the beauty of music.

Such a step has been a long time coming for the musician. In late 2012, one of Bruner’s musical partners and best friends, Austin Peralta, died of a drug overdose. Bruner’s heartbreak screams on “Without You”, accounting for the sleepless nights without Peralta’s inspiration, and swan song “Message for Austin/Praise the Lord/Enter the Void”. These tributes display Bruner’s strongest lyricism to date. To honor the musical genius, Bruner sets a “Special Stage”, recognizing the risks that the musician strove towards in his lifetime through the lyric, “if you play the game/ you can win in the end.”

In running down the checklist of the band’s assets, there are few characteristics left untouched here, including the complexity that initially attracted listeners to The Golden Age of Apocalypse. Bruner’s labyrinthian melodies on six-string bass are what catch people’s ear. Instead of navigating through skitsofrantic solo stints, he aims his bass to coat each song with a driving melody, pushing it forward and into outer space and other mysterious landscapes, especially “Tron Song”.

Bruner’s voice will “take [you] higher” as he gently croons multi-layer vocal harmonies that resemble R&B virtuosos like D’Angelo. While some songs use natural vocal takes coated with three-part harmonies and sensual intones, the musician delves in solo ventures similar to what a futuristic Bill Withers would do with an acoustic guitar. B-side highlight “Evangelion” leaves the mic to only Bruner and his bass, aside from a minimal drum track for keeping time, revealing a refreshing new strength. The 12-track effort pits his dynamic vocals at the forefront of nearly every song, showcasing a musical talent far beyond what’s exemplified through his fingers.

Juxtaposing the dance orientated backside of The Golden Age of Apocalypse, the band advances this development and melds their instruments with soulful strums while Bruner highlights the wonders of life through his lyrics. “Heartbreaks+Setbacks” navigates through the struggles that combat everyday happiness, but the coin is flipped with stimulating optimism in the chorus hook: “Baby, this could be/ our chance for us/ Maybe we’ll figure out who we’re supposed to be.” Such gems join the generational movement to live in the moment and animate yourself through love and dance.

Thundercat’s advancements on Apocalypse reconfigure the foundation that his debut album built. Each listen not only dives deeper into some of the most advanced instrumentalism heard this year, but also dissects each nerve ending of Thundercat’s heart: one that resounds to each beat, twinges with joy over the melodic surveys from his bass, and swoons over the magic manifested by a community loaded with passionate musicianship.