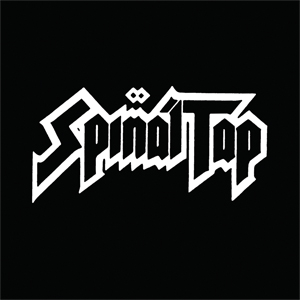 In 1984, British band Spinal Tap just couldn’t catch a break, as documented in director Marty DiBergi’s rockumentary, This is Spinal Tap. Their rapidly deteriorating US tour — aka, their comeback that never was — became every bit as simultaneously epic and cringeworthy as an 18” x 18” styrofoam Stonehenge. Next week, some 29 years after its release, the film’s soundtrack is being reissued on vinyl with the not quite legendary black cover– the very same cover band member David St. Hubbins once said “look[ed] like death.” And while we might be a long way from the group’s true glory days, there’s something about them that’s lasted far longer than any of their drummers did, and in a much fresher sense than, say, a preserved moose. In light of the occasion, we thought we’d digress on why we’re still into Tap.

This is Spinal Tap took on the format of a mockumentary. In ‘84, it was the perfect way to capture the delusion of a bunch of washed up rock stars. Nigel Tufnel (Christopher Guest), David St. Hubbins (Michael McKean), and Derek Smalls (Harry Shearer) could expound to DiBergi (Rob Reiner) without the slightest trace of self consciousness, no matter the giant warps in their perspectives or the absurdity of their self-analyses. It also provided more subtle ways to develop plot lines, like Tufnel’s animosity toward St. Hubbins’ girlfriend Jeanine, established through little looks and twitches whenever she talked. These days we’re even more fluent in mockumentary than we’ve ever been considering the success of shows like The Office, Parks and Recreation, and Modern Family. We wait for those moments in the confessionals where we can’t believe the person talking isn’t hearing themselves (“David and Nigel, they’re like poets, like Shelley and Byron.”)

Broken down, This is Spinal Tap is a timeless story about a band’s struggle to stay relevant after its prime. Their problems are not unique–  they have to survive friction between bandmates, and tensions from the introduction of Yoko element Jeanine. The hairstyles may change, but issues like these don’t. The same is true for the many smaller points and references to other items orbiting the music world like blistering album reviews, the quest for “drugs, sex, and rock ‘n’ roll,” and creative struggles with the record label.

You’re either sick of hearing quotes, or waiting for the chance to use one yourself. Thanks to some sharp and absurd writing, the lines carry through the decade. Tufnel’s explanation of his amps (“These go to 11”) has since become a cliche in album reviews, and NPR’s All Songs Considered even did a podcast on songs that go to 11. That’s only one line! This is Spinal Tap packs in record amounts of ridiculousness into all the various exchanges and ramblings of the band: the globule left behind by a spontaneously combusting drummer (“It was more of a stain than a globule, actually.”), the annoyance over proper billing (“Put Spinal Tap first, puppet show last.”), and the gear talk (“Listen to that sustain!”). St. Hubbins said it best, “It’s such a fine line between stupid and clever.”

There’s a lot about This is Spinal Tap that’s spot on, but part of what really set it apart from being just a goofball movie about a band of idiots were the songs. Between their Ed Sullivan-parodying performance of “Gimme Some Money”, their late 60s knock off that is “(Listen to the) Flower People”, or the pretentious joke behind “Rock and Roll Creation”, Guest, McKean, and Shearer nailed the tone and style of each song, and what’s more, made them incredibly catchy. Even if the crowd at the military base looked insanely uncomfortable during their conflictive rendition of “Sex Farm”, someone was probably tapping their foot.

5. They still love the band

Spinal Tap won’t go away. They’ve released two albums since ‘84 with both new and re-recorded material. Their most recent, 2009’s Back from the Dead, featured artists like John Mayer, Steve Vai, and Phil Collen. Between in-character interviews with serious newsmen like Charlie Gibson and gigs at Carnegie Hall and Glastonbury, it’s almost like they’re trying to convince us they’re real. And it would seem we accept this. Why not?