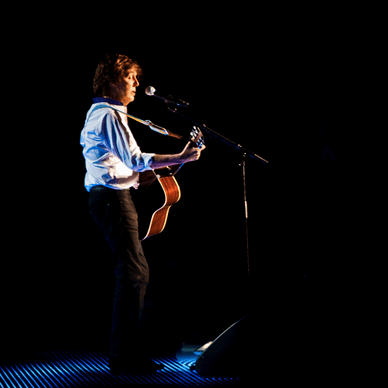 Maybe it was the bored woman with the Grateful Dead tattoo scalping floor seats for $350, or the middle-aged trio toking with all their might on The Smallest Joint In The World. Maybe it was the graybeard in a Sun Records shirt berating his limping friend in a tie-dye Rainforest Café tee for not bringing a flask, or maybe it was the two 17-year-old girls in matching, hand-painted-and-frayed crop tops, announcing their desire to record a song with Paul McCartney. The confluence of all of these people I met outside the Barclays Center in Brooklyn for the second-to-last show of this leg of McCartneys Out There tour screamed a shellacked flower-power idealism. The vision of the 60s was not dead. The bohemian simply melded with the bourgeois.

Do they still give out parking tickets? McCartney asked about halfway through his three-hour, 38-song set, following the Beatles Sgt. Peppers classic Lovely Rita. Are the people giving tickets still as lovely as Rita? These are McCartneys concerns in 2013: not parking tickets (he probably hasnt received one since 1967) but just making sure the meter maids are up to snuff.

Then again, calamity and loss seemed to be on the mind of McCartney Monday night. The through-line of the show was tribute. The band tagged a few bars of Foxy Lady to the end of Let Me Roll It, in honor of Jimi Hendrix. McCartney then told an anecdote about Hendrix asking for help tuning his guitar so he could impress Eric Clapton. This is a song I wrote for Linda, he announced before the opening grand piano riff of Maybe Im Amazed. Before going into Another Day, he dedicated the song to producer Phil Ramone, who passed away earlier this year. When he took an acoustic guitar to a 25-foot-riser, he spoke on the opportunities of today, urging the crowd to share thoughts and compliments with loved ones today, when we have the opportunity. He then dedicated Here Today to John Lennon, saying it was a conversation he and John never got to have. And when the band returned to the stage for a rendition of the Abbey Road classic Something, he dedicated the song to George Harrison. I played this with him then and I play it with him now.

Here, as on Eleanor Rigby and Being For The Benefit of Mr. Kite!, the composition was slightly (understandably) stripped from the recorded version. Something spiraled from a ukulele solo intro into an added section of the sky-high chorus. It was expansive and warm. Mr. Kite! sounded less carnival pomp and more straight psych and it smelled so heavily of weed during this cut it could have been pumped into the house through the fog machines. These were among the most unexpected, though the surprise of Helter Skelter in the second encore was both mind-blowing and ear-shattering.

Though McCartneys life has been one of the more scrutinized of the last five decades, making no secrets of his losses and tribulations, this all felt remarkably vulnerable of the 71-year-old. He makes even a room the size of the Barclays Center feel like a tea parlor. He responded to fans who yelled Good job Paulie! and spoke directly to those in the front rows about the 60s. He remains charming, witty, and impulsive, not passing up any opportunity for a good story or a joke.

Following Ob-La-Di, Ob-La-Da, he stepped up to the mic and refrained the chorus to a ditty about breakfast food. At one point, he talked about how he tries to read the messages on the crowd’s many signs, while also singing lyrics and remembering the chords. And this one, he said, referring to a banner. Brooklyn girls do it eight days a week? Could be true. I dont know. And Im not going to find out. So perhaps more representative of his secret of staying so solid after 50 years on stage is to just play it as it lies. Both his voice and demeanor were youthful, spry, and congenial.

Through all the fireworks of Live and Let Die and the strange Jeff Koons videos of giant, inflatable balloon dogs in landscape projected behind the band, the spectacle seemed requisite only for the size of the show. McCartneys greatest strength has always been about connecting on two deeply human levels: love and loss. Decades past, these songs never fail to make those two basic human emotions bubble up. On Monday night, the sadness of the past almost cracked his cheeky veneer. His immense success and sometimes haughty demeanor have kept him away from blue-collar adulation. But for that, the glimpses of all this pain and the humility in the tribute, it brought him off that two-story riser  hes still toiling through the pits of misery as best he can, just like the rest of us, always on the same basic level.

Setlist:
Eight Days a Week
Junior’s Farm
All My Loving
Listen to What the Man Said
Let Me Roll It / Foxy Lady
Paperback Writer
My Valentine
Nineteen Hundred and Eighty-Five
The Long and Winding Road
Maybe I’m Amazed
Things We Said Today
We Can Work It Out
Another Day
And I Love Her
Blackbird
Here Today
Your Mother Should Know
Lady Madonna
All Together Now
Lovely Rita
Mrs. Vanderbilt
Eleanor Rigby
Being for the Benefit of Mr. Kite!
Something
Ob-La-Di, Ob-La-Da
Band on the Run
Back in the U.S.S.R.
Let It Be
Live and Let Die
Hey Jude
Encore 1:
Day Tripper
Hi, Hi, Hi
I Saw Her Standing There
Encore 2:
Yesterday
Helter Skelter
Golden Slumbers
Carry That Weight
The End