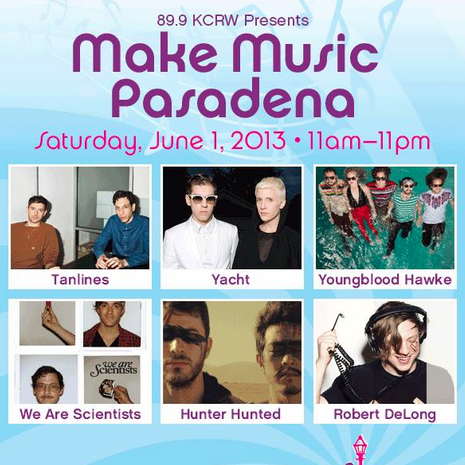 On any given day, Old Town Pasadena is a long row of bougie shops and restaurants, almost exhausting in its suburban cliches and known to most Angelenos as a place you either graduate to as a “real” adult or accidentally end up when you overshoot downtown on the 110. It’s teeming with normalcy, which makes the free, all-day, multi-venue, 150+ band festival in the middle of it all the more abnormal. It’s no small task to shut down the heart of a city, but after years of growing pains–the first year I went in 2011, I watched the Pasadena police stand onstage and not let The Morning Benders play until the massive crowd made a pathway–Make Music Pasadena has become a celebration that the city’s embraced.

Hunter Hunted, a prime example of the L.A. local band trajectory, kicked off my day. After only a few short months, they’re well on their way with a smattering of upcoming tour dates alongside Fun., Youngblood Hawke, and The Mowgli’s, all in the wheelhouse for this colorful band. Despite being thrust into the “buzzband” category seemingly overnight, they did have endearing moments of “new band” shimmer, including singer Michael Garner nervously saying things like, “I know it’s hot today, hopefully we’re going to cool you off.” (Huh?) They clarified with ready-made smash hits like “Gentle Folks”, “Operating”, and “Keep It Together”, all off their debut EP, which inspired pockets of squeals from the audience, a sound that’ll be all too familiar for them soon.

The Record Company followed on the main stage, wasting no time by launching into a beautiful a cappella intro from singer Chris Vos, drawing folks in with his classically trained vocals. The band got off to an impressive start, with much more texture than on their recordings. Their sound seems laced with whiskey and boot-stomping blues, a less polished but more daring version of The Black Keys. They could easily be a bar band in any given Midwestern town; however, in the context of a big outdoor stage, I felt the potential for bigger things.

Next up was YACHT, who was the subject of most of the chatter all day from anxious fans around me. I often joke that they seem to be the L.A. house band (see: Nada Surf in NYC), and clearly, its paid off. They were far and away the rock stars of the event, commanding the stage and playing off each other unlike anyone else that day. They recently wrapped up stints in Australia and Asia and seemed visibly excited to be home. I bought my first iPod at the Apple store down there, a heat-stricken Claire Evans exclaimed, before tossing water into the crowd and delivering the most poignant quote of the day: Its too hot for music!!!

No one felt the 90+ degree weather more than Washingtons Robert DeLong, six blocks away in the Playhouse District. The stage was completely exposed, and soon after launching into Religious Views, his computer started sputtering, forcing the very-programmed artist into stopping the set. The gracious crowd waited as they moved a pop-up tent over his worn-out machine, and he played on. While he has been largely embraced by the Indie crowd, his seamless set likens him closely to club DJs, which explained the high bro percentage in the densely packed and enthusiastic audience. This cuts into the flexibility of unpredictable elements, but other layers added a color I hadnt previously picked up on in his recordings. I quickly found myself texting my friends to get down to the stage and see it themselves.

While shows continued into the night in smaller, enclosed venues, the main stage closed down with Youngblood Hawke. If YACHT were the rock stars, Youngblood Hawke would be the movie stars, with everyone around me taking ownership of I knew them whens and scoffing at trendy fans who may only know their hit, We Come Running, which has major alternative radio spins and  VH1 You Oughta Know status.

In a day filled with this is so much better than the album! surprises, Youngblood Hawke stayed faithful to their debut, closely in the style of Grouplove–with an abundance of gang vocals, band/audience hugging, and floor toms for everyone. They certainly brought together the idea of community that comes with a festival like Make Music Pasadena, one that has supported bands in a way only Los Angeles–and even Pasadena–can.